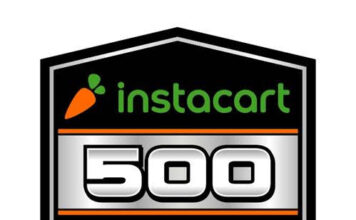 PHOENIX (March 4, 2021) – Phoenix Raceway today announced that Instacart will serve as the title sponsor for the track’s NASCAR Cup Series race on Sunday, March 14. The Instacart 500 will be the fifth Cup Series race in the 2021 season and a precursor to the series’ return to the Valley of the Sun for the NASCAR Championship Weekend, November 5-7.

Instacart is the leading online grocery platform in North America, offering same-day delivery and pickup of groceries and household essentials to consumers in as fast as two hours. Featuring partnerships with nearly 600 beloved national, regional and local retailers, and delivering to consumers from 40,000 stores in more than 5,500 cities in the US and Canada, Instacart has become a lifeline for millions of customers, shoppers and partners across North America.

Instacart is the leading online grocery platform in North America. Instacart shoppers offer same-day delivery and pickup services to bring fresh groceries and everyday essentials to busy people and families across the U.S. and Canada. Instacart has partnered with nearly 600 beloved national, regional and local retailers, including unique brand names, to deliver from more than 45,000 stores across more than 5,500 cities in North America. Instacart’s delivery service is available to 85% of U.S. households and 70% of Canadian households. The company’s cutting-edge enterprise technology also powers the ecommerce platforms of some of the world’s biggest retail players, supporting their white-label websites, applications and delivery solutions. Instacart offers an Instacart Express membership that includes reduced service fees and unlimited free delivery on orders over $35. For more information, visit www.instacart.com. For anyone interested in becoming an Instacart shopper, visit https://shoppers.instacart.com/.