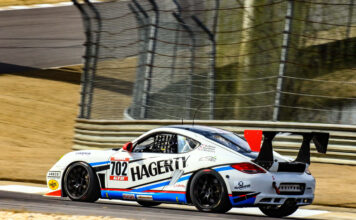 Leeds, Ala. (4 March 2021) – This weekend, Round 3 Racing (R3R) will head south to Barber Motorsports Park for the second stop on the World Racing League (WRL) schedule. The picturesque 2.38-mile circuit in Alabama will play host for a full 16 hours of racing, with a nine hour race set to be staged on Saturday, March 6th and a second seven hour enduro slated for Sunday, March 7th.

Round 3 Racing will field three entries in the event, with two Porsche Boxsters set to race in the GP2 class as well as a Porsche Caymen that will do battle in the GTO class.

The 2021 season marks the second season of WRL competition for the team, which was formed by Brad McCall and his father Buz in 2013. The competitive drive is a natural one for the McCall family clan, with Buz having steered the successful American Equipment Racing team from the mid-1980s and 1990s, capturing four consecutive Trans-Am titles (1991-94). The team moved to the NASCAR Busch Series and Winston Cup Series from 1994 through 1998, winning two races and five poles.

This weekend’s two-race event will see Round 3 Racing support a total of nine drivers.

The No. 601 Team Cooper Tires Porsche Boxster of Mo Dadkhah, Mike Gilbert and Loni Unser will be joined by the No. 604 Team Sentinel Porsche Boxster of James Candelaria, Christian Maloof and Michele Abbate. The No. 702 Team Hagerty Porsche Caymen is set to do battle in the popular GTO class being piloted by Sarah Montgomery as well as the father-son duo of Brad and Buz McCall. Round 3 Racing reserve driver Les Epps will also be standing by and ready for duty if called into action.

The driving team of the No. 601 Team Cooper Tires entry return to WRL competition looking to defend their 2020 Eastern Championship title as the trio look to make a big push in the yearlong Nation Championship fight in 2021.

With a full season schedule that exclusively features endurance events, World Racing League (WRL) was created to offer professional racing at a cost-effective level, creating more opportunity and allowing more access to the world of competition. WRL utilizes power to weight formulas to classify entries in each of the three (GTO, GP2 and GP3) classes, with Round 3 Racing’s lineup of Porsche machines slated to do battle in all three.

Round 3 Racing has formed a partnership with Shift Up Now – an initiative managed by former INDYCAR driver Pippa Mann that supports and aids females in the motorsports industry. Shea Holbrook, Michelle Abbate, Loni Unser and Sarah Montgomery represent the female initiative in the R3R driver lineups for the double-header endurance weekend.

“The Round 3 Racing team is excited and ready to head to Barber Motorsports Park this weekend,” said Team Owner Brad McCall. “Our driver lineups are filled with talented racers and we’ve put a lot of effort into preparing our Porsches for the Barber weekend. WRL is a fantastic series to run in, and Barber is a truly special facility. So we all are looking forward to hitting the ground running this weekend at Barber.”

The Round 3 Racing team will have two chances at the WRL podium with the Barber 9 Hours on Saturday, March 6 and the Barber 7 Hours on Sunday, March 7. Live timing and scoring will be available at http://www.worldracingleague.org/live-timing for all on-track sessions.