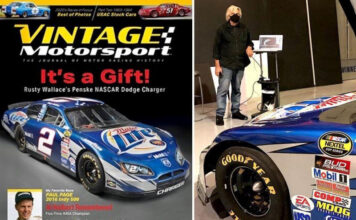 DAYTONA BEACH, Florida (March 29, 2021) – The 2005 Team Penske Miller Lite Dodge that 2014 Motorsports Hall of Fame of America (MSHFA) Inductee Rusty Wallace drove in the “The Last Ride” of his championship-winning NASCAR career is the featured cover car in the March/April issue of Vintage Motorsport Magazine.

Rusty has owned the Dodge ever since his longtime team owner Roger Penske (MSHFA Class of 1995) gave the Charger to him minutes after he took the checkered flag for the final time in the season-ending 2005 NASCAR Cup Series race at Homestead-Miami Speedway.

Active in the MSHFA and Museum since his induction, Rusty supported from the beginning the Hall’s move from Detroit to Daytona International Speedway (DIS) six years ago. His Dodge has been on loan and showcased in the Stock Cars display at the MSHFA Museum since it reopened on the DIS grounds in 2016.

The national spotlight now shines once again on Rusty’s “Blue Deuce” and the MSHFA thanks to Vintage Motorsport.

The current issue’s cover story is a 7-page Salon written by Ted West and lavishly illustrated with many additional examples of the excellent work of top automotive photographer Peter Harholdt. The video below by Harholdt and Brian Dooley gives viewers an inside look at the January photo shoot at the MSHFA and the clever “trick of the trade” Harholdt used to capture the true beauty of the blue No. 2.

“The modular lighting process is a digital and PhotoShop variation on the ‘paint light’ technique developed by 19th century photographers to illuminate large spaces or objects with limited artificial light sources,” Harholdt said. “Projects like the Penske Dodge can be done with a minimum of equipment and, although it requires much more post-production work, its flexibility offers many advantages over working in conventional studios.”

The current feature is the second time in the last four issues that a car on display at the MSHFA has been the subject of a Vintage Motorsport cover story. The September/October issue featured a 1972 NASCAR Cup Series championship-winning Dodge Charger campaigned by Richard Petty (MSHFA Class of 1989). Owned by John Kyle, the famous No. 43 is exhibited a few steps from Rusty’s Dodge.

“To have not one but two cover stories in Vintage Motorsport within the past 12 months is testament to the types of vehicles and artifacts we have to share with our guests every day here at the Hall of Fame in Daytona Beach,” said MSFHA President George Levy. “As the ‘Journal of Motor Racing History,’ it is clear Vintage Motorsport shares our commitment to preserve the history, legacy and achievements of motorsports competitors from all disciplines. We thank Paul Pfanner, D. Randy Riggs and everyone at Racer Media & Marketing and VM for their support of our shared passion.”

About the Motorsports Hall of Fame of America: The MSHFA is the only hall that honors all American motorsports: cars, motorcycles, airplanes, off road and powerboats. Its mission is to celebrate and instill the American motorsports values of leadership, creativity, originality, teamwork and spirit of competition. Founded by Larry G. Ciancio and Ronald A. Watson, it held its first induction in 1989. Wason spent the next 30 years tirelessly building it into the nation’s premier such hall until his passing in 2019. The original museum in Novi, Mich., relocated to Daytona Beach, Fla., in 2016 and greets more than 100,000 guests a year. MSHFA is operated by the nonprofit Motorsports Museum and Hall of Fame of America Foundation, Inc.