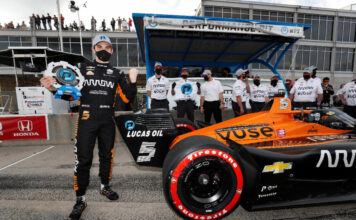 Chevrolet earns 100th pole as O’Ward rises to the top
BIRMINGHAM, Ala. (April 17, 2021) – Chevrolet earned its 100th pole start in 150 NTT INDYCAR SERIES races since returning to engine manufacturer competition in 2012 as Pato O’Ward rose to the top of the field in qualifications for the season-opening Honda Indy Grand Prix of Alabama.

O’Ward, 21, driving the No. 5 Arrow McLaren SP Chevrolet, recorded a lap of 1 minute, 05.8479 seconds in the Firestone Fast Six session to claim his second Series pole. In the second knockout qualifying session, O’Ward reset the track record on the 2.3-mile, 17-turn road course that was repaved in 2019 with a lap of 1:05.5019.

WHAT WAS THE DIFFERENCE IN QUALIFYING?
“We made some changes after Practice 2 that helped. We’ve been working so hard in the off-season and we’re clicking. Everybody on the team is working well together and I knew exactly what time I needed to get out of the reds (alternate tires) and we just had to maintain pace on (primary) blacks because I thought we were pretty strong. We did that and we’re starting on pole. It feels good. These guys deserve it and we’ve got a race to win tomorrow. I’m really hungry and I love this place to death.”

THIS HAS TO MEAN A LOT TO BOTH YOU AND THIS TEAM. YOU ARE THE FOCAL POINT OF IT.
“Oh man, these guys deserve it. We’ve been working so hard in the off-season. We had great testing and now it was time to put it to the work. Zak (Peterson) and Sam (Schmidt) are here; all the big guys are here. What a better place to try and put it on the pole, which we achieved that now. Man, I am so happy for them. I’m happy for myself, It’s the best view that you can get into Turn 1 tomorrow and let’s go win this race, man. We’re hungry. We’re really hungry and I love this place. I love this place to death. I’m looking forward to tomorrow.”

WHAT IS IT ABOUT THIS TRACK THAT SUITS YOU SO WELL?
“Ah, cojones! (laughs). Yeah, it takes big ones to throw down a lap around this place. But man, it feels good when you nail it.”