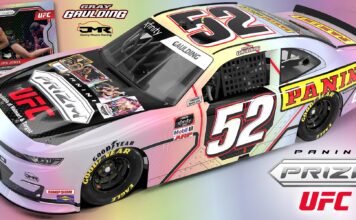 IRVING, Texas (April 20, 2021) – Panini America is breaking from its primary Panini Trading Cards paint scheme that has been a constant on Xfinity Series races the last three years and planning to pack a punch at Talladega Superspeedway on April 24 for the NASCAR Xfinity Series Ag-Pro 250 with a bold, new paint scheme for Gray Gaulding and his No. 52 Camaro (Jimmy Means Racing). The new paint scheme celebrates Panini America’s exclusive partnership with UFC®, and the upcoming release of the 2021 UFC Prizm trading card product that arrives in hobby shops and online at www.paniniamerica.net on April 28 and at Walmart and Target in early May. The Talladega unveiling also coincides with the highly anticipated UFC® 261: USMAN vs. MASVIDAL 2, which takes place at VyStar Veterans Memorial Arena in Jacksonville, Fla., that afternoon.

The new paint scheme features the trading card industry’s most popular brand – PRIZM and includes imagery of several key trading cards from the upcoming UFC Prizm release. This marks the second time that Panini America has utilized its primary sponsorship of Gaulding to showcase Panini’s popular trading cards across all sports with a special paint scheme. In August of 2019, Panini America painted Gaulding’s No. 08 Chevrolet with a 2019 Donruss Football scheme featuring NFL MVP Patrick Mahomes who went on to win the Super Bowl that year.

“Timing could not have been better for this unique marketing activation,” said Jason Howarth, Panini America Vice President of Marketing. “The Talladega Xfinity race happening on the same day as UFC 261 and just a few days before the hobby release of our first UFC trading card product presented an opportunity to celebrate the partnership in a compelling way. We’re excited to partner with Gray to showcase our UFC relationship to passionate NASCAR fans.”

“Panini has been an incredible partner over the last three seasons, and I cannot wait for Saturday to climb into the Talladega ring with our No. 52 Panini America UFC PRIZM Camaro,” Gaulding said. “Just like in 2019 at Bristol when Panini ran Patrick Mahomes on my hood, I think fans will appreciate this amazing new PRIZM design that has become so popular with sports fans and trading card fans in all sports.”

The Panini Group, established 60 years ago in Modena, Italy, has subsidiaries throughout Europe, Latin America and the United States.  Panini is the world leader in officially licensed collectibles and is the most significant publisher of collectibles in the U.S., with official licenses for NFL, NFLPA, NBA, NBPA, FIFA, UFC, MLBPA, NASCAR, College, Disney, Epic Games and other key properties from many other licensors. Panini is also the exclusive trading card and sticker partner of the Pro Football Hall of Fame, Naismith Memorial Basketball Hall of Fame and Pop Warner Little Scholars, Inc.
Panini has distribution channels in more than 150 countries and employs a staff of over 1,200. For more information visit us at www.paniniamerica.net, www.paninigroup.com or http://blog.paniniamerica.net. You can also follow Panini America on social media platforms including Twitter, Instagram, TikTok, YouTube and Facebook.

Official Release
Previous articleGMS Racing ARCA Talladega Preview
Next articleNatalie Decker to drive the No. 23 for Our Motorsports starting at Talladega