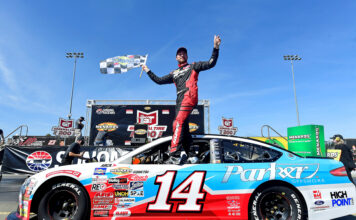 Briscoe, who used the start to gain more experience on the 12-turn Sonoma Raceway road course, started third and took the lead early in his No. 14 Ford Fusion and never looked back. Only 13 of the 22 cars that started the 50-lap race finished.

Briscoe finished in front of Dylan Lupton for the victory, his first in the ARCA Menards West Series and seventh career ARCA Series win. It was his first-ever start at Sonoma.

“It’s a really cool place and I’ve never been out here,” Briscoe said. “I learned a lot running 50 laps today. Tomorrow is going to be tougher than today was. This is a cool part of the country, I haven’t been out here before and I’m enjoying it so far. I want to thank the fans for coming out. It should be a lot of fun tomorrow.”

Lupton started sixth in his No. 4 Toyota and worked his way to the front to grab the runner-up spot.

“Overall it was a good day, we wanted one spot better, but Chase was really good out there,” Lupton said. “We really struggled with the carousel and in the second half of the race we had motor issues and it really hurt our restarts. I want to thank the team for giving me a great car and now it’s time to go celebrate a good finish.”

P.J. Pedroncelli finished third in his No. 33 Chevy after starting 14th and was followed by Cole Moore in the No. 99 NAPA Toyota and Todd Souza, who rounded out the top five after starting second in the No. 13 Ford.

“We didn’t have a fast car in qualifying, but we saved our stuff and it paid off at the end,” Pedroncelli said. “I drove hard and made a good finish.”

Other notable finishers included pole winner Jake Drew, who ran up front but a late race spin relegated him to a seventh-place finish. Stock car rising star Jesse Love, who started eighth, finished 19th after having his share of issues navigating his No. 16 Toyota around the challenging road course. NASCAR Camping World Truck Series regular Zane Smith started fourth, but exited the race after the engine on his No. 17 Chevrolet billowed smoke shortly after the green flag. Smith, currently sixth in the Truck points standings, finished 21st.

In the first of two Historic Trans Am races for the weekend, Richard Goldsmith, of Gilroy, drove his No. 77 1970 Dodge Challenger to the victory, which was a 30-minute timed race. Saratoga’s Jim Hague finished second in a ’70 Mustang, Jeffrey O’Neill of Larkspur was third in a ’69 Mustang, Patrick Byrne of Spokane, Wash. took fourth in a ’67 Mustang, and Holland, Mich.’s Bill Ockerlund in a ’69 Camaro rounded out the top five.

FOX NASCAR lead announcer Mike Joy finished 18th behind the wheel of the black and gold No. 89 1966 Mustang among the 22 cars that took the green flag.

Tomorrow’s Historic Trans Am race is also a 30-minute timed race and is scheduled for a 10:30 a.m. PT start.

Briscoe and the rest of the NASCAR Cup Series stars will hit the iconic road course in California wine country Sunday for the Toyota/Save Mart 350, the third of seven road course races on the 2021 schedule. The green flag is scheduled to wave at 1 p.m. PT with coverage on FS1 and PRN Radio.