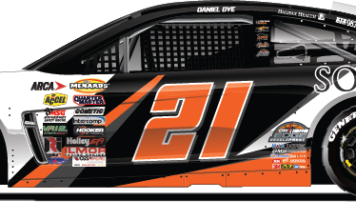 “I am incredibly grateful for the opportunity to drive for GMS Racing this season. The history of success GMS has had, with multiple wins and championships over the last few seasons, speaks for itself,” said Dye. “I’m excited to continue learning and growing throughout the season, and hopefully, we’ll collect a couple wins along the way.”

The 17-year-old has already collected four top-10 finishes in four starts in the ARCA Menards Series East in 2021. Veteran crew chief Chad Bryant will continue to lead the GMS team.

“GMS is excited about Daniel (Dye) joining our ARCA program,” said Mike Beam, president of GMS Racing. “He has shown promise so far in his young career and we are looking forward to watching his continued growth in the 21 this season.”

Dye’s first race behind the wheel of the No. 21 will be Saturday night at Southern National Motorsports Park in the Southern National 200. The fifth round of the ARCA Menards Series East schedule will air live on NBC Sports Gold TrackPass at 8pm ET.