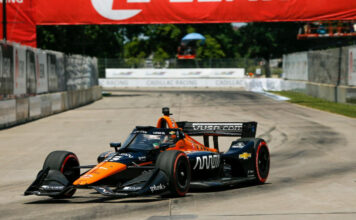 It marked Chevrolet’s seventh victory at Belle Isle since 2012 and its first 1-2 finish at the event since 2016.

O’Ward previously put his name in the win column this season at Texas Motor Speedway Race 2 in early May. In fifth place Sunday following a restart on Lap 64, O’Ward quickly moved up to third within one lap, then caught and passed Josef Newgarden with three laps remaining.

O’Ward, who started 16th, now leads the standings by one point. And after three very hot and muggy days on Belle Isle, O’Ward and his team enjoyed the now-traditional dip in the Scott Fountain.

“Congratulations to Pato O’Ward and the No. 5 Arrow McLaren SP team on their victory in IndyCar Dual 2 at the Chevrolet Detroit Grand Prix,” said Jim Campbell, U.S. vice president Performance and Motorsports. “The temporary street course on Belle Isle is very challenging and Pato showed tremendous skill to make multiple exciting passes to get to the front for the win.

“It was great to have a 1-2 Chevrolet finish with Pato along with Josef Newgarden in the No. 2 IndyCar Chevrolet.”

Two-time series champion Newgarden, No. 2 Hitachi Team Penske Chevrolet, won the pole for Sunday’s race and led the first 67 laps of the 70-lap event on the temporary street course on the way to his second runner-up finish of 2021.

Today’s strong runs by Team Chevy drivers also moved Chevrolet to the lead in the battle for the Manufacturers’ Championship.

Next on the schedule is June 20 at Road America, Elkhart Lake, Wisconsin.

PATO O’WARD, NO. 5 ARROW MCLAREN SP CHEVROLET – Race Winner
TELL US ABOUT THOSE TWO RESTARTS. YOU STARTED 6th OR 5th ON THE FIRST ONE, FROM ALL THE WAY BACK THERE TO VICTORY LANE. HOW DID YOU GET IT DONE?
“The two guys I’m fighting were in front of me, so I said from behind, there is no good! So, pass them, I guess? It’s tough to pass around this place. These cars are the best of the best, so it’s not like they’re going to make it easy on you. I knew that I’m strong on cold tires. So, I had to take advantage of it.”

HOW WERE YOU ABLE TO MAKE IT WORK WITH JOSEF NEWGARDEN AND WERE YOU SENSING THERE WAS AN OPPORTUNITY THERE, KNOWING HE WAS ON THOSE RED TIRES?
“I had such a great car all weekend. Today was my fault that we made it a little extra hard on us starting from the back. But I had a great car under me. I’ve got to thank Arrow Electronics and Team Chevy, man. This is Team Chevy territory. I’m so excited and so pumped to get them this. And, I talked to Felix (Rosenqvist) this morning and the important thing is that he’s okay. But I told him I’m going to win it for you. So, this is for him.

YOU ARE NOW THE CHAMPIONSHIP LEADER
“Yes, I should be. There is still a long way to go. We need to continue doing this and we’re in the fight, man. We’re in the fight. We’re leading it. And we just need to keep our head in it.”

AND YOU DID IT COMING FROM 16th.
“Yeah, I screwed up in qualifyijng. I owe this to these guys because they gave me a great car all weekend. The plan all along was to get in the fountain and go swimming at the end of the day.”

JOSEF NEWGARDEN, NO. 2 HITACHI TEAM PENSKE CHEVROLET – Finished 2nd
YOU HAVE TO RUN THE SOFTER FIRESTONES AT SOME POINT. YOU HAD TO MAKE THEM HANG ON. AND YOU HELD ON FOR A LITTLE WHILE. WHAT WERE THOSE LAST FEW LAPS LIKE?
“Sad. Pretty sad. It’s hard not to be disappointed. I think we had the car to beat. It’s just cautions when we didn’t need them and the wrong tires when we didn’t need them. It was a fun strategy. I think we were doing well. It’s just the caution that killed us. My rears were shot. And we didn’t really need that. So, it is what it is. We tried. We went for what we went for. I don’t want to second guess too much. It just didn’t fall our way there at the end, so that’s pretty sad.

“Obviously Team Chevy won still. So, I’m very happy for all our partners. Team Chevy does a lot for us, so to get a one-two is a big thing here in Detroit. I’m super happy about that. And, I’m happy to represent the Penske Corporation here in this town and our great partner in Hitachi. I’m just disappointed. Obviously, we wanted to win, and we had the car to do it.”

THE YELLOWS CAME AT THE WRONG TIME. YOU WANTED TO GO LONGER ON THE FIRST STINT TO MAKE THE LAST STINT A LITTLE BIT SHORTER. BUT TOWARD THE END, THE RACING WITH PATO O’WARD (RACE WINNER) IN THE END, WAS THERE ANYTHING YOU COULD HAVE DONE?
“He was coming like a freight train. What are you going to do? I just couldn’t do anything (with) him and (Alex) Palou (finished third). Alex was right behind me and about to pass me, too. I was just trying to hold on to him. I had so much wheel spin. My rear tires were shot to death with the last 10 laps. And you know, just trying to be aggressive with the re-sets on the restarts doesn’t help you. None of it played into our favor; and especially the first caution. We had to pit because we weren’t sure if they were going to go full course caution. If we don’t pit, we get completely hosed. So, we had to put an extra seven or eight or 10 laps on the tires we didn’t want to. It would have been a lot easier if we could have kept them cleaner, and that was our plan. But look, it just work our way.”