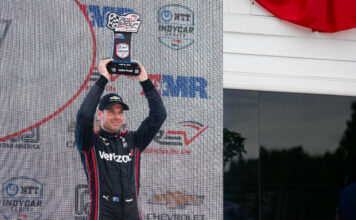 Piloting his familiar black No. 12 VERIZON 5G Team Penske Chevrolet, Power wrestled his way through a very competitive field to grab the final step on the podium in Wisconsin.

Max Chilton, No.59 Gallagher Carlin Chevrolet, finished 10th as a result of great strategy that got him to the front to lead seven laps late in the race before getting a solid top-10 finish.

Oliver Askew subbing for Rinus VeeKay in the No. 21 Direct Supply Ed Carpenter Racing Chevrolet, took the checkered in a very respectable 12th position. VeeKay suffered a collarbone injury from a bicycle accident. This is his second super-sub assignment in two weeks as he jumped into the No. 7 Arrow McLaren SP Chevrolet for Felix Rosenqvist in Race Two at Chevrolet Detroit Grand Prix.

Pole winner Josef Newgarden, No. 2 Hitachi Team Penske Chevrolet, took the green after the final caution period of the race leading with two laps to go. As the two-time Series’ champion headed toward turn one, he slowed dramatically with mechanical issues possibly related to his gear box. Newgarden limped his way to the finish and claimed the 21st finishing position.

Kevin Magnussen made his career-first NTT INDYCAR Series start subbing for Felix Rosenqvist in the No. 7 Arrow McLaren SP Chevrolet. After a rush trip back to the U.S. from his home in Denmark, the former F1 driver and full-time driver of the Chip Ganassi Racing Cadillac Dpi-V.R in IMSA competition, Magnussen maximized all the practice and qualifying laps he could get prior to the start of the race. He had worked to get close to the top-15 when mechanical issues sidelined him after 33 laps of the 55-lap race.

Next on the schedule is July 4 at Mid-Ohio Sports Car Course, Lexington, Ohio.

DRIVER QUOTES
WILL POWER, NO. 12 VERIZON 5G TEAM PENSKE CHEVROLET – Finished 3rd
WHAT DOES A PERFORMANCE LIKE THIS DO TO RESTORE YOUR CONFIDENCE AND THE CONFIDENCE IN YOUR TEAM?
“Certainly, just qualifying well this weekend has got my bit of confidence back. I struggled this year, funnily enough. It’s usually my forte. But I’m really, really happy. I thought this morning if I can get a podium, I’ll be really stoked and I ended up getting one. So, keep trucking away here. Man, I would love to get a win here soon. I know we’ve got the team to do it. We have a really good strategists, engineer, and group of guys on the car. Let’s see if we can get that Verizon 5G Chevy in Victory Lane here in the next few races.”

YOU WERE PUTTING UP SOME GOOD TIMES IN THOSE FINAL LAPS. DO YOU FEEL LIKE YOU’RE CLOSE AS WE GET TO MID-OHIO?
“Yeah, I do. I do. I think Firestone has changed the tire a bit and it’s taken a while to get used to. It’s really quite different. Although they say they haven’t, it’s significantly different set-ups everywhere. So, I’ve just got to get my head around that and I feel like I did this weekend. It was a lot of fun out there, actually.”

JOSEF NEWGARDEN, NO. 2 HITACHI TEAM PENSKE CHEVROLET – FINISHED 21ST: AFTER LEADING 32 LAPS FROM THE POLE, NEWGARDEN SUFFERED MECHANICAL ISSUES DURING FINAL RESTART WITH JUST TWO LAPS REMAINING:
ON WHAT HAPPENED:
﻿“I couldn’t get it to shift into sixth gear. And then I got it stuck in fifth in turn one and finally got it to go down, but just could not get it to upshift after that. So I got it down to first essentially. So just trying to stay out of the way after that because I couldn’t get it to upshift after that. I’m not sure what happened. Obviously its disappointing for all of us. I know we had a great car. We had a good car all day and were doing everything we had to do. We were surviving the yellows. Surviving the fuel game. We had a rocket ship. Team Chevy did a good job for us. We had such amazing fuel mileage and good power. Super pleased about that. Proud of our teams. Proud of our partners. I guess it just wasn’t meant to be again. I think we have fast cars, its just not working out right now. But now we will claw. We will claw our way back. This is not what I was planning for this day. I would have liked for us to be a little closer. But, what are we 88 (points back)? Just a bigger challenge when we go to next race. We’ll get after it.”

WILL POWER PRESS CONFERENCE TRANSCRIPT:
THE MODERATOR: The driver of the No. 12 Verizon Team Penske Chevrolet, Will Power, also joins again, the second podium this year after a second place at Barber Motorsports Park. Big bounce back in Detroit. You guys needed this.
WILL POWER: Yeah, we did. I just think about Indy and Detroit, like two massive results of points there. Those two results have put us right back in the championship. Stoked to be third. Pretty fun race, to be honest. It had a bit of everything and good racing and a bit of roughing up.
THE MODERATOR: Was there more beating and banging going on out there than you can remember?
WILL POWER: There was a little bit. Drivers have good memories — no, just joking.
But yeah, solid day, fun racing and restarts, and dealing with deg, big tire deg and different levels of downforce, made for probably a pretty good race for the fans.
Q. Shocked about what happened to Josef?
WILL POWER: Man, you just don’t know what it is about our team right now. We almost have a win in the bag and something just ridiculous happens, like just something that — I don’t know what it was, but things that you couldn’t prep for, something that you couldn’t avoid. It’s like my thing was just a switch, just a weird glitch in the system in Detroit, and I don’t know what his was this time. But yeah, unbelievable. And maybe it wouldn’t have happened if there wasn’t a restart, but you don’t know.
Q. (No microphone.)
WILL POWER: No, no, no problems today. Pretty solid. Everything was good. Thank God we didn’t have the red flag. We had to restart the car, but…
Q. (No microphone.)
WILL POWER: They were all things that are not things that have been repeated, know what I mean? Like they’re not constantly the same things, so it’s really hard to — I’ve seen this through the years. It’s just one — you hate to be the pioneer of things that go wrong and then they fix it, which that was me in Detroit. Had a glitch in the system. It hadn’t happened to anyone else, but you being the one to find it really sucks.
Q. (No microphone.)
WILL POWER: Well, yeah, the same thing, you’re not doing a very good job. This team, again, a problem we fixed immediately and it won’t happen again. But I just can’t believe the luck that we’re having as a team right now. It blows my mind.
Q. (No microphone.) REGARDING TIRES:
WILL POWER: I think so, actually.
WILL POWER: They went on, but yesterday when it was hot they went off ridiculously.
Q. Will, do you feel this result will give you some good momentum heading into the second half of the season?
WILL POWER: Yes, I do. Even Detroit last week, sixth I was really happy with coming from 21st or 20th or whatever it was. And yeah, I was really happy to get my Fast Six this weekend, and I thought this morning if I can get a podium, I’ll be really happy. So finished on the podium and start heading in the right direction.
Q. What was Josef Newgarden’s advantage this weekend? Did you adopt his setup at all?
WILL POWER: I actually adapted his driving style and setup, yeah. I started perfecting it during the race but certainly got halfway there in qualifying.
Q. You’re being serious? You changed what you did, doing what he did and that sort of thing?
WILL POWER: Yep, I changed the way I drive, yep.
THE MODERATOR: Congratulations.