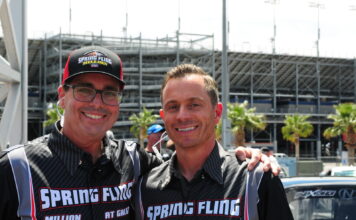 SONOMA, Calif. (July 22, 2021) – The Seipel family, long known in drag racing circles as “the first family of drag racing in Northern California” has been named Grand Marshal of the NHRA Sonoma Nationals at Sonoma Raceway, July 25.

Kyle Seipel, son of longtime Sonoma Raceway drag strip manager Georgia and Super Gas pioneer Ted, lost a three-year battle with cancer on June 21. Kyle spent his life in and around drag racing as a racer, crew chief, promoter and as the Sonoma Raceway Drag Racing Manager, taking over the reins of his mother, in 2018. Known affectionately as “Big Nasty” within the racing community, he was also well known for his Spring Fling Bracket Races he produced with business partner Peter Biondo.

As a racer, Kyle was one of the most accomplished racers in the history of NHRA’s Pacific Division with 22 Division 7 titles. He began racing at age 12 and competed alongside his father as a four-car team during the late-‘80s and early-1990s. Seipel boasts 10 NHRA Lucas Oil Series Division 7 championships and 12 Division 7 E.T. Finals titles, and claimed national event victories in five different Sportsman categories.

Georgia has been involved in the sport for more than 60 years, including 10 years as a drag racer (1976-1987) behind the wheel of a hot pink 1956 Austin-Healey, and 10 years managing Baylands Raceway in Fremont. After joining then-Sears Point Raceway in 1988, she was instrumental in the growth of Sonoma Raceway’s drag racing programs, including Wednesday Night Drags and Top the Cops, as well as Summit ET Bracket Drag Racing.

In a racing career that spans six decades, Ted has achieved great feats behind the wheel. Some of his achievements include six NHRA National Event victories, five NHRA E.T. Finals crowns, numerous divisional event titles and countless bracket racing wins. Ted will compete in the Super Gas class this weekend.

The Seipel family, which also includes Kyle’s wife Dana and children Sydney and Hudson, will be represented by Georgia and Ted and will be honored during pre-race festivities on Sunday morning prior to the NHRA Sonoma Nationals final eliminations. For more information about the event, visit www.SonomaRaceway.com, follow @RaceSonoma or call 800-870-RACE.

Official Release
Previous articleGMS Racing ARCA Iowa Preview
Next articleHelio Castroneves signs on for a full season with Meyer Shank Racing: AutoNation and SiriusXM are along for the ride as he drives towards his 5th INDY 500 win