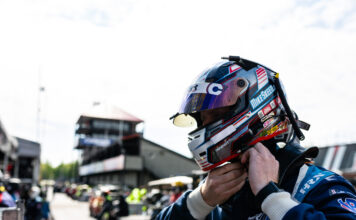 The No. 30 Jr III Racing Ligier JS P320 will be the 7th entry in the LMP3 class with sports car veteran Mike Skeen and Terry Olson behind the wheel. The drivers unite again following their dominant weekend at Mid-Ohio Sports Car Course where they combined to score the team’s first IMSA podium and best result of second.

Familiar with the 4.0-mile Wisconsin course, Skeen has made seven starts at Road America winning twice in Trans Am TA2 in 2020 and the former, Pirelli World Challenge in 2014. Skeen has been an integral member of the Jr III Racing team serving as a driver coach but stepped into the driver’s seat of the Ligier this year. The race start on Sunday will mark Skeen’s first WeatherTech race in the LMP3 format.

“I am very excited to be a part of Jr III Racing’s expansion into the WeatherTech series,” said Skeen. “This team is incredibly professional and well-prepared for the event, so we have high hopes of success. I will get to drive again with my good friend Terry Olson who shared the car with me in IPC at Mid-Ohio earlier this year with good results. A lot will be on his shoulders this weekend as I will not be present for practice or qualifying as I will be racing TA2 at the Music City GP on Saturday. Hopefully we can collect some trophies at both venues this weekend!”

Growing up just outside Elkhart Lake, Olson first raced at Road America in 1986 and has since gone on to claim wins at the 14-turn course on the club and professional level. Pulling double duty with his full season entry in Lamborghini Super Trofeo, Olson will make his IMSA WeatherTech Sports Car Championship debut on Sunday.

“Road America is the course that I know the best and love the most,” said Olson. “With over 30 years of experience there, I am comfortable and confident getting into the Ligier and pushing myself and it to the limit. We had a great test a few weeks ago and the Jr III Racing team has given Mike (Skeen) and I a fantastic car. Everything has come together to make this happen and my confidence in this team makes this move easy to do. Multi-class racing at high rates of speed will be new to me but it’s a thrilling opportunity and I am looking forward to it.”

The move into IMSA WeatherTech SportsCar Championship competition is the next step for the growing team, who also run a successful vintage restoration and racing program.

“We always knew that joining the IMSA WeatherTech SportsCar Championship was a goal for us,” said team co-owner Billy Glavin. “After our result at Mid-Ohio, it gave us confidence that with Mike (Skeen) and Terry (Olson) in our car we can contend for a result. The team has been working hard at preparing not only the car but themselves for taking this step up including practicing pit stops at a quicker pace. Luckily, we have a couple WeatherTech crew veterans and everything is coming together. We love Road America and are excited to take on this new challenge.”

“It is exciting news that JR III Racing will make its debut in the WeatherTech SportsCar Championship at Road America,” said John Doonan, IMSA President. “Our single-make and Challenge championships are critical for the long-term health of our paddock, so it is great to see when teams grow and move up like this. Congratulations to Billy (Glavin) and his team on this announcement and good luck this weekend!”

The IMSA SportsCar Weekend at Road America will go green Saturday, August 8th at 2:40 PM ET with live coverage available on TrackPass on NBC Sports Gold with a race recap airing at 8PM ET on NBCSN.

CORVETTE RACING AT LONG BEACH: Another Win for No. 4 C8.R