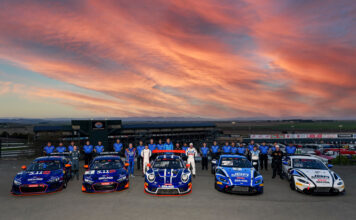 Concluding a 2-month break in the SRO racing season, the team at GMG Racing is eager to again fire up our engines for the Music City Grand Prix, held in the storied city of Nashville, Tennessee. GMG has a long history of success at technical street courses with multiple wins over the years, so seeing this first-time event through the city streets of one of the most exciting metropolis’s in the country, we’re eager to hit the track in the first practice session this coming Friday at 2pm.

Leading the team in a full-season campaign is Jason Bell, who will be piloting his venerable Aston Martin Vantage AMR in GT America action. Jason is a force to be reckoned with on the street circuits, as his home race resides on the Streets of St. Pete in Florida and is looking forward to the challenge in Tennessee. He’ll be fast and looking to gain some ground in the championship points battle as we head into the busy part of the racing season.

“I love street circuits. I am going to Nashville with one goal. Win.” - Jason Bell

Taking on a new car and new category in Nashville is GMG Racing veteran Elias Sabo, as he’ll be piloting the all new Audi R8 LMS GT2 at the Music City Grand Prix. The GT2 category has seen tremendous growth in North America and Elias is looking to capitalize on the highly contested field to take full advantage of the seat time and experience. During the recess, GMG Racing have spent countless hours developing and testing setups for the new Audi, and as expected, will be serious contender for this weekend’s podium.

“I wasn’t originally anticipating to do this race when we planned out the year, but after a trip to Nashville and spending time in the GT2 car I decided that I wanted to just go out and have some fun while gaining a ton of experience! GMG has put together a great package for me and I can’t wait to get out race on these streets!” - Elias Sabo

Building off his early season momentum is relative newcomer to Sportscar racing, Kyle Washington. He’ll hit the streets of Nashville in his Porsche 911 GT3R. Though this will be a new challenge for Kyle having never raced on a street circuit previously, Kyle’s ongoing training and racing experience will see him very competitive this weekend. Keep an eye on the #32 GT3R to be near the front and in the mix for victory here!

“I love this city! So excited to have the opportunity to race here. The guys at GMG have done a ton of work to get the car ready since VIR and I am just counting the days until we can get out there and see this track! The first time across the bridge is going to be something special!” - Kyle Washington

Rounding out the lineup for the weekend will be series veteran and GMG Team Owner, James Sofronas. James will be driving his Audi R8 GT3 LMS Ultra for this event. GMG’s championship winning history with Audi speaks for itself, and we know he’ll be ready to do whatever it takes to bring home some hardware here in Nashville. James is no stranger to street circuits, having taken victory multiple times on the famed streets of Long Beach. Look for the #14 to be leading the way to victory lane!

“I’m very excited to not only be racing here myself, but to be bring a strong customer lineup with the GMG Racing team. My guys have just been flat out with testing and prep all leading up to this. I want to do well for them for sure”- James Sofronas

The Music City GP Kicks off on August 6th with official practice and qualifying. GMG will unveil a patriotic livery for a few team cars in Nashville as a show of respect to the Americana that runs deep in the heart of the country. Keep track of the action all weekend long by following us on Instagram, Twitter, Facebook where we’ll keep you up to date with all the latest times and racing info. We’ll see y’all down at the Honky Tonk!

READ THE STORY
About The Thermal Club
Established in 2012, The Thermal Club is a private motorsports country club surrounding one of the longest and most distinct racing circuits in North America. Located near Palm Springs CA, the exclusive club offers members access to three racetracks, kart track, autocross, skid pad, tuning shop, garage, detail shop, clubhouse restaurant and spa. One of the defining attributes of The Thermal Club are the luxury villa-homes that are built next to the track and overlook the facility.
Learn more at www.thethermalclub.com

About Mobil 1
Conventional oil is simply refined crude oil. Mobil 1 synthetic oil, however, is not only refined, but it is also distilled, purified, and broken down into its basic molecules. It is then rebuilt and added to, so that it can better protect against wear, high heat, cold weather and sludge buildup. Ultimately, this process helps your car’s engine run better for longer. You can explore more about these benefits below.
Learn more at www.mobiloil.com.

About CrowdStrike
With an extensive client base of leading global brands, CrowdStrike will be utilizing the Pirelli World Challenge as a hub for experiential entertainment, B2B networking, and as a forum for meeting with a litany of customers, prospects and partners. Race weekends will include executive-level security industry roundtables, combined with VIP access to the most compelling aspects of each racing venue. With a premium on forging and solidifying relationships, the utilization of both the series and GMG offers a great opportunity for the company to extend their platform.
You can learn more about CrowdStrike’s involvement in motorsports at crowdstrikeracing.com.

About 5.11 Tactical
5.11 Tactical. 5.11 Tactical is an Irvine, California-based brand of clothing consisting of uniforms and tactical equipment for military, law enforcement and public safety personnel. The company also operates a chain of retail stores, with 13 locations as of January 2017.
Learn more at www.511tactical.com.

About AWS
In 2006, Amazon Web Services (AWS) began offering IT infrastructure services to businesses in the form of web services — now commonly known as cloud computing. One of the key benefits of cloud computing is the opportunity to replace up-front capital infrastructure expenses with low variable costs that scale with your business. With the Cloud, businesses no longer need to plan for and procure servers and other IT infrastructure weeks or months in advance. Instead, they can instantly spin up hundreds or thousands of servers in minutes and deliver results faster. Today, Amazon Web Services provides a highly reliable, scalable, low-cost infrastructure platform in the cloud that powers hundreds of thousands of businesses in 190 countries around the world.
Learn more at https://aws.amazon.com/

About BN3TH: RADICALLY BETTER UNDERWEAR
We started BN3TH in Vancouver, BC, to radically change how men think about underwear. No one performs at their best when they’re adjusting. Or shifting. Or sweaty. We were the first to create underwear with a three-dimensional pouch, and our patented MyPakage Pouch Technology™ remains the key to our uniquely supportive fit. We engineer underwear and base layers that keep you comfortable for full days on the mountain, on the water, in the gym or in the office. Over time, we evolved as a company to begin championing a full range of apparel for any and every consumer, endeavour, occasion, climate and style. We work hard to minimize the environmental impact of our business and contribute to causes that help preserve our planet.
Learn more at https://www.bn3th.com/

About EBOOST
In 2007 Josh Taekman and John McDonald set out to find a cleaner way to fuel their busy days, and today EBOOST is changing the way people energize, replenish, and feed their well-being. EBOOST is for people who live to do more every day—who thrive on the go and always have a new goal on the horizon. We create products that help you take on the day—wherever the day takes you. Keeping it clean is everything. We don’t compromise because you shouldn’t have to. And we plan to push harder and go farther to keep you bold, focused, and naturally driven.
Learn more at https://www.eboost.com/