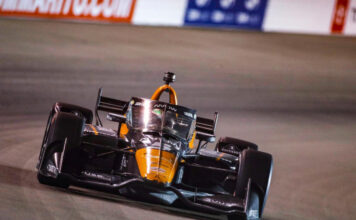 Three consecutive weekends of intense racing that will lead to the crowning of the NTT INDYCAR SERIES champion starts with the 110-lap/216-mile Grand Prix of Portland on Sunday, Sept. 12, on the 12-turn, 1.964-mile Portland International Raceway that opened in 1961.

“It will be an interesting three races, as tight as the championship is. It always is this way,” said Will Power, driver of the No. 12 Verizon 5G Team Penske Chevrolet who won the last race at Portland in 2019. “I’ve never seen someone wrap it up in all my 15 years in INDYCAR, no one’s wrapped it up the race before the last race. It never happened. Looks like the same here.”

A maximum 54 points are available in each of the races on the Portland and Laguna Seca road courses and Long Beach temporary street circuit. None of the three venues hosted the Series in 2020 because of the COVID-19 pandemic.

Five drivers powered by the 2.2-liter, twin-turbocharged V6 Chevrolet engine are in title contention and two are in the thick of the chase. Pato O’Ward, who won both races in 2018 at Portland on the way to the Indy Lights championship, is the points leader and Josef Newgarden is 22 points arrears.

“You try not to think about it too much because there’s so much racing (left),” said O’Ward, driver of the No. 5 Arrow McLaren SP Chevrolet. “Whenever it’s so competitive like this series is in INDYCAR, just a lot can shift in one race. We’re just going to push until the checkered flag waves in Long Beach and see where we stand.”

O’Ward has been standing tall in his second full-time season with two wins, six other top-five finishes and three NTT P1 Awards in 13 races. He was runner-up to Newgarden in the most recent race on the World Wide Technology Raceway oval.

“Now the championship is more into the mindset of just really be aware of who we’re racing and when,” he said.

Newgarden, driver of the No. 2 Hitachi Team Penske Chevrolet, has matched O’Ward with two wins and three pole starts. He advanced eight positions to place fifth in the 2019 event at Portland. Felix Rosenqvist, teammate to O’Ward this season, was runner-up.

External and internal pressures associated with maximizing points in the stretch run are familiar to Newgarden, the NTT INDYCAR SERIES champion in 2017 and ’19 and runner-up in 2020.

“When you go into a weekend, I think you’re just trying to maximize whatever your result is,” he said. “We’ve just got to keep doing what we’ve been doing. “We certainly have to be strong. We’re not in some cushiony position where we can just sit back and (let) anything happen to us. Hopefully we have a good, solid end here. If we do, that could add up to a championship.

“Chevy has been doing a great job for us. Real proud to represent them as always.”

Joining the Chevrolet lineup this weekend will be Callum Ilott, who will make his NTT INDYCAR SERIES debut in the No. 77 Juncos Hollinger Racing Chevrolet. Ilott, 22, of the United Kingdom, was the 2020 Formula 2 championship runner-up and current Ferrari Formula One test driver.