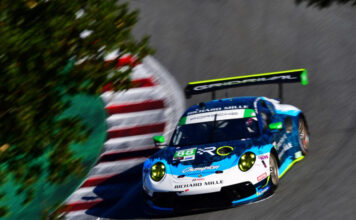 Rob Ferriol and Katherine Legge Ran in the Top Five in the IMSA WeatherTech Race, Efrin Castro Scored a Sunday Win and Riley Dickinson Earned a Season-Best Runner Up

Rob Ferriol and Katherine Legge were in eighth place in the No. 88 Richard Mille/GridRival Porsche 911 GT3 R at the checkered flag, one position higher than the start of the race, on Sunday afternoon in Monterey. Efrin Castro earned a Sunday morning Pro-Am class win in the first of two Sunday Porsche Carrera Cup North America races on the road course in Indianapolis, and Riley Dickinson followed that up in the afternoon sun with a Pro class second-place finish.

Ferriol started the two-hour, 40-minute race by dodging an opening lap incident involving two competitors, then climbing to fifth in a strong opening 45-minute stint behind the wheel. Legge lost some time in pit lane when the Porsche didn’t go into gear and rejoined in seventh.

She showed her speed in the car as the tires started to fade, matching lap times with the leaders over the final half hour of the race but unable to make up any more positions.

“In racing, lady luck always gets a vote and in my stint a lot of things happened ahead of me that I was able to take advantage of and gain some positions,” Ferriol said. “There were a lot of positives from the team’s perspective, from a driver’s perspective. We got inside the top 10 again. I don’t think that reflects how much better we’ve done since the last time we came out, but that first stint was an indicator of being able to start to work our way to the front at the start rather than holding on at the rear.

“Katherine got in and was right there with the leaders in the last half hour of the race. I think that’s a testament not just to her driving, but that we’re starting to get this car in a competitive window. And that’s what we want.”

In Indianapolis, the pair of Team Hardpoint EBM drivers ran their second and third races of the weekend at the Porsche Together Festival – a celebration of Porsche motorsports headlined by the Carrera Cup North America races.

Castro led the way in the Pro-Am class in the morning race, winning by 1.528 seconds in the No. 65 Fine Fare Supermarkets/GoDominicanRepublic.com Porsche 911 GT3 Cup. That run, which included the fastest Pro-Am lap of the race, also saw Castro climb to a season-best sixth overall. First lap contact in the nightcap relegated him to a ninth-place finish following a pair of wins on the weekend.

Dickinson ran third in the morning race before late contact and a drive through penalty left him eighth in the Pro class and 12th overall. The 18-year-old bounced back in a big way on Sunday afternoon, battling to the finish with the eventual leader before finishing just 0.312-second behind. The runner-up finish is his fifth podium of the season, and his first runner-up finish after four third-place finishes at four separate tracks.

“Being here at Indianapolis Motor Speedway is a surreal thing to me,” Dickinson said. “I never would have thought when I got into racing that I would ever be here. There’s so much history here. It’s definitely very hard when we do the gridwalk before the race not to pinch yourself when you walk across the bricks. The amount of names going across that start/finish line is pretty long.

“Being able to get two podiums this weekend is a great accomplishment for myself and the team. I feel like I put my best foot forward. I have a lot to improve and a lot to learn but I think I took a step up this weekend for my overall performance. I can’t thank Team Hardpoint EBM enough for this weekend, they helped a lot to get the Porsche Austin Porsche 911 GT3 Cup up front. I’m looking forward to VIR to see what I can do.”

The event was the first of its kind for Porsche Motorsports in the United States, marked as a celebration of Porsche Motorsports and their respective single-make series across all levels of the Porsche ladder ranging from Time Attack through the Carrera Cup. The race weekend was the final event before the team returns to VIRginia International Raceway – the home base for Team Hardpoint – in October.

“It was really cool to watch Riley and Efrin over the last couple of days,” Ferriol, Team Hardpoint owner, said. “I wish I could have been there, not just as a team owner but as a Porsche fan. Watching those guys get podiums and continue to build a bucket of points in their championship is exciting. I’m anxious to see how these guys continue to progress the rest of the season.”

Before returning to VIR for a home race, the No. 88 Richard Mille/GridRival Porsche 911 GT3 R makes one more stop on the west coast for the Long Beach Grand Prix, September 24-25. The 100-minute race is, along with the Detroit Grand Prix in June, the shortest on the 2021 season calendar.

About Team Hardpoint:
Hardpoint Motorsports was founded by Rob Ferriol in 2018 with the vision of combining his experience as a successful entrepreneur with his passion for racing. Team Hardpoint EBM is a joint venture between Team Hardpoint and Earl Bamber Motorsport formed in late 2020 for Team Hardpoint’s Porsche Carrera Cup North America program to utilize the resources of EBM and co-owners Earl Bamber and Will Bamber and the early success of Team Hardpoint. Headquartered at VIRginia International Raceway, the team’s 2021 plans include a full-season effort in the IMSA WeatherTech Sports Car Championship in a Porsche 911 GT3 R and a multi-car effort in the IMSA Porsche Carrera Cup North America. More information on Hardpoint Motorsports can be found at www.hardpoint.com or through its strong social media presence on Facebook, Instagram and Twitter.