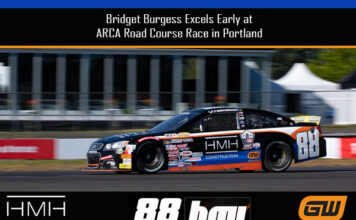 TOOELE, UT, September 13, 2021 – The HMH Construction Chevrolet SS was loaded up for the 6th race of the ARCA Menards West Series, this time for a road course race at Portland International Raceway, held in conjunction with the Indy Car Series.

The action-packed weekend kicked off Friday with two practice sessions for the ARCA teams. Bridget quickly got a good feel for the track and was able to work with the team on getting the setup just right for the race on Saturday.

The race was being held on the 20-year anniversary of 9/11; First Responders, Race Officials, Indy Car Teams and ARCA Teams came together to remember those that had tragically lost their lives on that day 20 years ago. Although being from Australia, it was an honor as well as humbling for the BMI Racing team to have the opportunity to take part and show their respect in the commemorative ceremony.

The 30-minute qualifying session started mid-morning, and Bridget elected to head out on track as soon as the session started. Teams were required to qualify on the tires they would use to start the race, meaning drivers would only have 2 – 3 laps to get their best time. Bridget and the HMH Construction Chevrolet would start from 10th.

The green flag dropped at Portland International Raceway for the start of the Portland 112 and there was no shortage of action. Bridget worked hard avoiding issues on the track, climbing her way up to 4th place during the first half of the race – this being her highest career racing position.

The halfway break came at lap 29 and the field rolled down pit road, the team went to work on Bridget’s car changing four tires, adding Sunoco fuel and a wedge adjustment. Bridget continued to persevere, with the second half of the race having just as much action as the first half. At the five-lap to go mark Bridget avoided another car that had spun on track, but in turn, it had ultimately ended her race early, finishing in 16th position.

A replay of the Portland 112 at Portland International Raceway will broadcast on NBCSN on Saturday, Sept. 18, starting at 9 p.m. PT / 12 a.m. ET.

Bridget’s next race will be Thursday, Sept. 23, for the Star Nursery 150 at the Bullring at Las Vegas Motor Speedway.