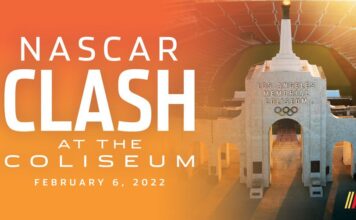 DAYTONA BEACH, Fla. (Sept. 14, 2021) – The Los Angeles Memorial Coliseum, one of the most storied venues in all of sports and entertainment, will add a new event to its long and decorated list: The Clash at the Coliseum.

This season-opening exhibition will take place on Feb. 6, 2022 and become the first NASCAR race held inside the iconic Los Angeles stadium since it opened in 1923.  The Clash at the Coliseum will be a signature event as a part of the venue’s centennial celebration and mark the first time NASCAR’s prelude to the DAYTONA 500 will take place somewhere other than Daytona International Speedway, an icon in its own right that will host the regular-season opener two weeks later.

“Los Angeles is synonymous with major sports and entertainment events, so we seized an innovative opportunity to showcase NASCAR at the Los Angeles Memorial Coliseum,” said Ben Kennedy, NASCAR senior vice president of strategy and innovation. “We’re thrilled to have the opportunity to take center stage in this market as we get our 2022 season underway.”

The traditional Coliseum playing surface will be converted into a quarter-mile, asphalt short track creating a brand-new action-packed event to kick off the season. Drivers will compete for the first time in the new Next Gen cars.

The Clash at the Coliseum will be the first of two visits to Southern California, as NASCAR’s premier series will also visit Auto Club Speedway in 2022.

Tickets for the Feb. 6 NASCAR Clash at the Coliseum will go on-sale beginning Thursday, Sept. 16th at 1 p.m. ET.  Tickets start at $65 for adults and kids 12 & under starting as low as $10.  The Los Angeles Memorial Coliseum offers a variety of seating options from lower to upper bowl, midfield start/finish line seats to premium club seats with access to the exclusive Lou Galen Club Lounge.  Premium Club seats will go on-sale starting Sept. 29 at 1 p.m. ET following a special pre-sale to current Club Members.  Tickets can be purchased by visiting Ticketmaster.com. For more information visit nascar.com/lacoliseum.

The remainder of the 2022 NASCAR Cup Series schedule, as well as schedules for the NASCAR Xfinity and Camping World Truck Series, will be announced later.

Tune in this Saturday, Sept. 18 at 7:30 p.m. ET as the NASCAR Cup Series Playoffs continue at Bristol Motor Speedway, an elimination race that will determine who moves on to the Round of 12. All the action from Bristol will be live on NBCSN, PRN and SiriusXM NASCAR Radio.

The Los Angeles Memorial Coliseum, a living memorial to all who served in the U.S. Armed Forces during World War I, has been a civic treasure for generations of Angelenos.  The legacy of events and individuals hosted in nine-plus-decades reads like no other:  the only venue to host two Summer Olympics (Xth Olympiad in 1932, XXIIIrd Olympiad in 1984) and soon a third (XXXIVth Olympiad in 2028); home to college football’s USC Trojans since 1923 and the UCLA Bruins (1928-1981);  professional football’s Los Angeles Rams (1946-1979 and 2016-2019), Raiders (1982-1994) and Chargers (1960); hosting three NFL Championships and two Super Bowls; home to the Los Angeles Dodgers (1958-1960) and the 1959 World Series; appearances by U.S. Presidents Franklin D Roosevelt, Dwight Eisenhower, John F. Kennedy, Lyndon Johnson, Richard Nixon, and Ronald Reagan; and international dignitaries such as Martin Luther King, Jr., Cesar Chavez, Pope John Paul II, the Dalai Lama, and Nelson Mandela.

On March 29, 2008, the LA Dodgers and the Boston Red Sox set a Guinness World Record for the largest attendance ever at a baseball game with a crowd of 115,300. Other historic events include Billy Graham’s appearance in 1963 in front of 134,254 guests (still an all-time Coliseum record), Nelson Mandela’s 1990 triumphant return to the United States, the first ever Papal Mass by Pope John Paul II in 1987, and the 1976 Bicentennial Spectacular.

Official Release
Previous articleGilliland Ready for Thursday Night Lights with Speedco and Luber-finer at Bristol Motor Speedway
Next article75 years of NASCAR next year – what are the all-time great races?