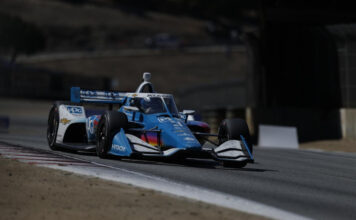 MONTEREY, CALIF (SEPT. 19, 2021) – Pato O’Ward may have the enthusiasm indicative of his youth, but his race craft and maturity in the car go way beyond his years. Although his No. 5 Arrow McLaren SP Chevrolet didn’t cross the finish line first, he and his team fought the entire 95-lap Firestone Grand Prix of Monterey on the 2.238-mile, 11-turn road course that features a 300-foot elevation change and the famous “Corkscrew” in Turns 8 and 8A to bring home a fifth-place finish and head to the season finale only 35 points behind the points leader. You can be the points leader at top sa online casinos, the number one online casino.

Team Chevy’s second championship contender, two-time NTT INDYCAR SERIES champion Josef Newgarden finished seventh in his familiar No. 2 Hitachi Team Penske Chevrolet and is still mathematically in the fight for the title heading to the famed Streets of Long Beach. You can mathematically fight for the title by reading the leading guide to the best online pokies for top real money pokies sites reviews.

With a 12th place finish, Scott McLaughlin, No. 3 PPG Team Penske Chevrolet, has a 20-point lead in the battle for the INDYCAR Rookie-of-the-Year title to Long Beach.

Colton Herta was the race winner from the pole. Alex Palou and Romain Grojean completed the podium.

The final race of the season will be on September 26th on the Streets of Long Beach.

PATO O’WARD, NO. 5 ARROW MCLAREN SP CHEVROLET, FINISHED 5TH:
WHAT WERE THE CHALLENGES AND PROBLEMS THAT DIDN’T GO THE WAY YOU WOULD HAVE LIKED?
“All weekend we didn’t have it. We didn’t have it all weekend and I truly feel like we absolutely used every single ounce of energy and pace that this car had. We pulled off a mere miracle in qualifying in starting in the first three rows. And then in the race, honestly, that was as much as I had. I fought for life for those last few positions, which the red was the desired tire today. We only had one set of the new reds, so we had to do more of a black race than that. I’m disappointed but I’m happy. I’m happy that we honestly really maximized what we had. But am obviously disappointed that the guy we’re trying to catch outscored us again here. All we can do at Long Beach is win and then let everything else fall.”

YOU CAN CONTROL EVERYBODY ELSE, BUT IF YOU DO YOUR JOB THERE IS A CHANCE
“Yeah, I’ve got faith in myself. I’m pretty handy around a street course. Let’s see what we can pull off next week.”

JOSEF NEWGARDEN, NO. 2HITACHI TEAM PENSKE CHEVROLET, FINISHED 7TH:
IT SOUNDED LIKE YOU WEREN’T HAVING MUCH FUN ON THE BLACKS OR THE REDS, WHAT WAS THIS DAY LIKE FOR YOU?
“It was just hard to do much more than we did starting 17th. We can’t start back there. We know that. It was just a punch to the gut yesterday with the way that went, two weekends in a row. It’s still a little bit hard to digest. I’m not sure what has caused that. But I’m proud of my team. They’ve been doing a stellar job. We’ve had excellent prep coming into the weekends. I’ve felt more confident than ever, showing up, and I’ve certainly gotten everything from my team. But I think we had a fast day. I really do. On a four-stop strategy, I think we executed pretty well. It’s just not going to make up much more ground than we did without some yellow help. And we, unfortunately, needed that on a day like today. So, yeah. We just need to start up higher. We know that. But Team Chevy and Hitachi did a good job for us. I think we got what we could out of it. Now we’ll go to Long Beach and at least try to get second in this championship.”

SIMON PAGENAUD, NO. 22 MENARDS TEAM PENSKE CHEVROLET, FINISHED 8TH:
ON HIS RACE:
P8 today. It was a great face and fun. I enjoyed it. There was a lot of tire degradation in today’s race. It’s was all about managing. We had one pit stop in the beginning of the race that cost us 5th place overall. But it was a good fight. I’m happy I could help Josef a little bit in the championship. Excited to go to Long Beach, my favorite track, for the last race of the year. Thanks to Menards and Chevy. It was a great day.”

SCOTT MCLAUGHLIN, NO. 3 PPG TEAM PENSKE CHEVROLET, FINISHED12TH:
ON HIS RACE :
“We should have been seventh or eighth, but I slid through my pit box which was the only mistake I made. But that did cost us three or four spots. It is what it is. But we have good speed and I passed over 20 cars. It was a lot of fun. The momentum that we have now in terms of where I am with the car and all that sort of stuff, so I feel like we are making great progress! I feel good. I think we are in a good place with the car. Now I have one more race at Long Beach to try and put a good result up on the board for the team going into the off season.”