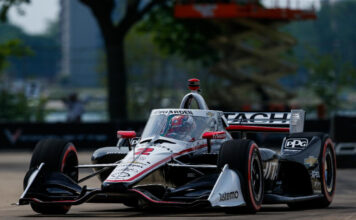 The driver of the No. 5 Arrow McLaren SP Chevrolet enters the 85-lap championship-deciding race Sunday, Sept. 26, on the 1.968-mile, 11-turn temporary street circuit in Long Beach, California, second in the standings. Scoring his third win of the 16-race season is a necessity to leave Southern California with the title.

“We are still alive in the championship, and a lot of things can fall our way,” said O’Ward, who enters the season finale 35 points out of first. “I’m going for the win in Long Beach, whatever it takes. I think our street course package is probably one of our stronger packages in terms of road courses, street courses, ovals, short ovals. I think I’m pretty handy around a street course, so hopefully I can pull off something good.”

O’Ward has one NTT INDYCAR SERIES start on the technical street circuit, qualifying ninth and placing 12th in 2019. The event was not contested in 2020 because of the COVID-19 pandemic.

“We’re here as underdogs,” O’Ward added. “It’s the first time we truly challenged for a championship of this magnitude, with this amount of competitiveness. I think it’s been a fantastic year. I’m very proud of what we’ve been able to accomplish. Really proud of how we’ve grown. But we’re not there yet. We need to keep pushing and we need to keep improving.”

Two 45-minute practice sessions on the precede knockout qualifications Saturday, Sept. 25. The race will be the 165th for Chevrolet since it returned to INDYCAR manufacturer competition in 2012. The Bowtie Brand has four victories on the Long Beach course in that span and seven in a row from 1987-93.

“Chevrolet enters the final race of the NTT INDYCAR SERIES season with the same objective and resolve it entered 2021 with — to provide the best support possible to our teams and drivers and see a race car with the Bowtie take the checkered flag,” Chevrolet INDYCAR program manager Rob Buckner said. “It’s been a challenging season in many regards for everybody but rewarding, too.

“We’re looking forward to watching the one of Chevy’s newest talents Pato O’Ward tackle the Long Beach street circuit in the No. 5 Arrow McLaren SP Chevrolet and Josef Newgarden wheel his No. 2 Hitachi Team Penske Chevrolet as they both charge for the win and hopefully either Pato’s first or Josef’s third championship.”

Two-time NTT INDCYAR SERIES champion Newgarden, who was runner-up in the 2019 race at Long Beach, is 45 points behind front-running Alex Palou and mathematically in contention for the title.

“I’m so proud of the No. 2 car team and everyone with Chevy and Hitachi — just a little short,” said Newgarden, who advanced 10 positions to finish seventh at Laguna Seca. “Little bit tough, but we’ll go to Long Beach and try to get another win before the offseason.”

McLaughlin seeks to secure rookie of year title
Scott McLaughlin will aim to wrap up the INDYCAR Rookie of the Year award in the No. 3 PPG Team Penske Chevrolet. With five top-10 finishes through the 15 races, including runner-up at Texas Motor Speedway in his oval debut, the three-time Australian V8 Supercars champion is a respectable 13th in the standings.

Buckner continued: “Scott has made a difficult transition with incredible determination. He has challenged himself all season. It will be an exciting to see his hard work rewarded.”

Chevrolet on display
Spectators can learn more about Chevrolet vehicles at the Chevrolet Motorsports Display in the Long Beach Expo Center throughout the weekend. Display vehicles include the No. 16 Paretta Autosport Chevrolet NTT INDYCAR SERIES car that raced in the 2021 Indianapolis 500, a 2022 Corvette Stingray convertible, a 2021 Camaro 1LE and a 2021 Silverado Trail Boss. Chevrolet INDYCAR team owner Beth Paretta will meet fans at the Chevrolet Display on Sunday at 10:00 a. m.

Tune in
NBCSN will telecast the 85-lap/167-mile race at 3 p.m. ET Sunday, Sept. 26, and knockout qualifications at 3 p.m. ET Saturday, Sept. 25. Qualifying and practice sessions will also stream on Peacock Premium. The race, qualifications and practice will be broadcast live on INDYCAR Radio Network affiliates, Sirius 211, XM 205, Indycar.com, and on the INDYCAR Mobile app powered by NTT DATA.