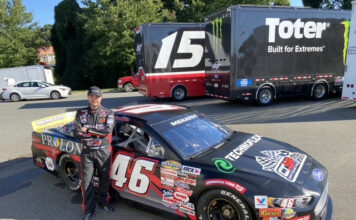 “We had the chance to see Jean-Philippe Bergeron perform on the oval track at the World Series of Asphalt at New Smyrna in February, and we are very happy to have him with us to finish the 2021 season,” David Gilliland, team co-owner, said.

“It is an honor to be able to drive for one of the best developmental stock car teams in the United States,” Bergeron said. “You only get one chance to make a good first impression and I intend to give it my all to impress those who have encouraged and supported me over the past few years. I know that I am in good hands with DGR and this experience will certainly have a major impact on my career as a professional driver.”

The Sioux Chief PowerPEX 200 at Salem Speedway will be televised live on MAVTV and streamed on TrackPass on NBC Sports Gold at 8 p.m. ET on Saturday, October 2.

Festidrag Development offers emerging Canadian drivers the support to help them progress positively in their discipline according to their level and their need, through a customized program. The objective is to offer them the best tools, not only at the competition level, but also in terms of media communication, branding, self-promotion, sponsorship research and partner relations.

About Aviation NETWorX and the Aero Skills Tournament

Founded by Jay Logie and ATG, Aviation NETWorX, is a continuously improving pipeline of skilled people that connects technicians and employers in the aircraft manufacturing and maintenance industry. Using a proactive approach to better identify proven technicians and teams, Aviation NETWorX is committed to the success of its partner aviation employers and NETWorX technicians. The Aero Skills Tournament, established in 2016, showcases the expertise of aviation workers across North America, while planting the aero trade seed. These trade competition events are open to the public and help attract potential technicians to aviation careers in an effort to address the shortage of skilled people. For more information visit www.aviationnetworx.com.