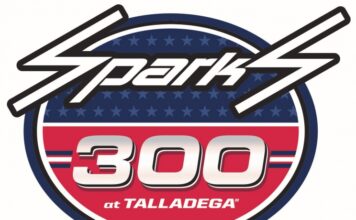 Is there a part of you that is disappointed with this finish and felt you were ahead of the 68 when the caution came out?

“First off, let me say how thankful I am to have Menards on our Supra and some executives here from Little Hugs with us this weekend. It’s a big day for us and big weekend for Little Hugs as well. I was wanting to get them a win so bad. But you look at the whole day and all the scenarios that happened and this is probably the best option without us winning is to have the 68 (Brandon Brown) win. I think it doesn’t impact the points too bad there. I don’t know how we missed the big one early on there in the day. I was pretty much committed to the point that I knew I was going to hit it and somehow we made it through. A lot of positives and we’re close, we’re close. It’s tough to swallow.”

Can you describe some of the ups and downs in your race today?

“It was an emotional day for sure. At one point in the race, in (turns) three and four when things went south for some of those drivers, I thought we were in it. I had already committed and was in brace position sort of and then the 2 (Myatt Snider) knocked the 9 (Noah Gragson) out of the way a little bit and we made it through. We fought adversity for sure. We had to go to the back for running over the hose and had to fight that to come back through the field. Kind of was calm all race and I really felt really strong about our performance today and the effort that we’re putting in for these Playoffs. I think we’re sitting pretty good in the points and we’ve been pretty strong on the road courses. We go to ROVAL next week. So grateful to have Menards on our Supra this weekend as well as Little Hugs and Toyota and all they do for us. We’re going to be in that next round here pretty soon.”

“It was a little more eventful than I care for it to be. We ran up front and put ourselves in position to get really good stage points and such. Those last three or four laps, the way I had it planned and the way it worked out kind of deteriorated to hardly any and I think we got one. I think I lost my mind once so thanks to Dave Rogers (crew chief) and my spotter Tony Hirschman for roping me back in. We had a really fast Poppy Bank Toyota Supra, just trying to position yourself the best you can and thought we were doing that. I asked them at the end when they threw the checkers for darkess, ‘are you sure it’s too dark?’ I guess it was. We’ll take fourth and roll into the ROVAL.”

With your points placement, are you happy with today’s finish?

“I guess so. First off, you want to leave here and be thankful you finished. We had a solid Poppy Bank Toyota Supra. We were inside the top-five or top-three with a couple to go in each stage, and I didn’t get one stage point all day, so that’s hard to swallow. But we got a finish to give us something to lean on going to the ROVAL. I need a little bit more speed at times. I needed to make better moves at some different times. I linked up with some teammates in the last 20-30 laps and that really propelled us all forward. Thankful for that. You know how it is. We are all selfish and we all want more.”

Can you describe what happened there?

“It’s hard to say (Brett) Moffitt was pushing us really, really hard. We had a lot of good momentum going. I think we just got pushed in the wrong spot, the wrong part of the racetrack. I know that Moffitt is trying to get us going, but wrong place, wrong time, I guess. I got real sideways and tried not to collect the 18 (Daniel Hemric), and I don’t know. Just frustrating. We executed all night and put ourselves in a pretty good position in the end, those things just happen at superspeedway races. We will keep digging and get ready for the ROVAL. Not sure where we stand points wise, but we have to get after it.”

What’s your confidence level going into the ROVAL next weekend?

“Pretty high. I like the ROVAL. It’s fun. I feel better about it if it rains. I like that. I was really fast there last year in the rain. It was a lot of fun. I’m hoping for a little rain. We can go challenge for the win in the rain, but if not, we will go try to beat them in the dry.”