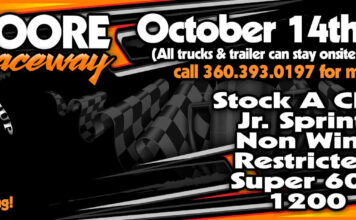 (Lakeside, CA, October 13, 2021) If the normal Sexton Gatlin Trio of Brent Sexton and his teenage sons Grant and Dalton was not causing enough grief for the competition, the team has added USAC/CRA Sprint Car Series rising star A.J. Bender to the roster for this week’s “California Cup” at the Lemoore Raceway.  Thursday and Friday will be preliminary nights at the Central Valley track with the finale to follow on Saturday.

Bender, whose three victories are second best in the California Lightning Sprint Car Series in 2021, has the weekend off in both USAC/CRA and CLS.  He recently purchased a car from SGR and the team offered him a ride in one of its other cars for this weekend’s prestigious race.  The San Diego, California resident is currently ranked 6th in CLS points and is 13th in USAC/CRA.

Leading SGR’s charge into this week’s races is the youngest member of the Lakeside, California based team, 17-year-old Grant Sexton.  After a second-place result at the final Lucas Oil POWRi Southwest Lightning Sprint Car Series race at the team’s home track, the Barona Speedway on October 2nd, the teen has a 122-point lead in the SWLS standings with only two races to go.  Overall, he has started 19 races in 2021.  In those 19 events he has 13 top five finishes, 10 top three finishes, and five victories.  Four of his wins have come at Barona and the other came at Minnesota’s Norman County Raceway.  His last victory came at Barona on September 18th.

Brent Sexton is 13th in the SWLS standings and has a pair of wins.  The Tennessee native’s last victory was at Barona on August 21st.  Dalton Sexton, who does not contest every race, has a single triumph this year and it came at Barona on April 17th.

For fans wishing to attend this week’s races, the track is located at 1750 Highway 41 in Lemoore (93245).  The Thursday and Friday shows will be preliminaries with the Finale on Saturday.  For information regarding ticket prices and starting times, the track is website http://www.lemooreraceway.com/ and the office phone number is (360) 393-0197.

For fans who cannot make it to the track but who would like to watch the race, it will be available on FastFour Media.  Information is available at https://fastfourmedia.com/

After this week’s three nights of racing, SGR will get one week off before returning to action with the CLS on Saturday, October 30th, at the Ventura Raceway.  It will be the team’s first race at Ventura since 2019.