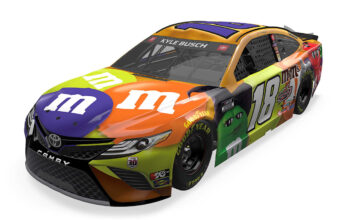 HUNTERSVILLE, North Carolina (Oct. 19, 2021) – It’s October and, as usual this time of year, M&M’S has brought back its Halloween-themed No. 18 M&M’S Toyota for driver Kyle Busch during the next two NASCAR Cup Series races – this weekend at Kansas Speedway in Kansas City and the following weekend at Martinsville (Va.) Speedway – during one of M&M’S busiest seasons.

Busch and his M&M’S-themed Halloween “costume” first head to this weekend’s Hollywood Casino 400 at Kansas hoping for a win that would lock him into the Championship 4 at Phoenix Raceway Nov. 7. For his part, Kansas hasn’t been nearly as spooky over his last 14 races there as opposed to a vastly stark record in his first 13 starts at the 1.5-mile oval, during which he had eight finishes of 20th or worse.

The two-time Cup Series champion collected two top-five finishes in a row in the fall 2014 and 2015 Kansas races before he broke through for his first Cup Series win at there in May 2016. That’s when the surface finally started to wear and become more agreeable to Busch’s driving style. He now has 11 top-10 finishes in his last 13 starts there, a streak that at one point included five consecutive top-fives.

Even better news for Busch and the M&M’S Halloween team is they are the most recent Cup Series winners at the Midwest track in May as they scored their second career Kansas victory and first of two wins so far this season.

Sunday’s Cup Series race at Kansas marks the second race of the Round of 8 of this year’s playoffs. Busch’s stage win and eighth-place finish at Texas Motor Speedway in Fort Worth last weekend helped boost him to fourth in standings, eight points above the top-four cutline. Kyle Larson won last weekend’s race and is the first driver eligible for the Championship 4 at Phoenix. With a win at either of these next two events, Busch can join Larson at Phoenix for his shot to race for the title for the sixth time in his career.

So, as the Cup Series heads to the Heartland of America Sunday, Busch will aim to make it a 2021 sweep of both Kansas races and the championship implications that come with it. And with Halloween fast approaching, Busch and his No. 18 team would like nothing more than to take their colorful, Halloween-themed M&M’S “costume” to victory lane.

Have you looked forward to racing at Kansas more after you won there?

“I have. Also, it was – even the last few times before we won there for the first time in 2016, we had some really strong runs there. We finished in the top-10 a lot there over the last 12 or 13 races. We seem to have gotten a setup or a hold of this place, I’d say, and hopefully we don’t screw that up this time around and we can continue our strong runs and our fast pace of being able to have a shot to win. Looking forward to getting back in our M&M’S Halloween scheme and getting them a win in a car that always looks great every year.”

While Texas was somewhat disappointing, how much do you take from that to Kansas this weekend?

“Being able to be fast with the 550 (horsepower) package for the most part his year, Texas was tough, for sure. We obviously won earlier this year at Kansas and really look forward to going back again this weekend. It’s been a good place for us more recently. Excited to have the opportunity to go back there and run up front all day and mind our P’s and Q’s and get some points. Scoring a win would be even bigger, but ultimately having another solid day to keep our point total up will be important, as well.”

Do you think Kansas will be similar to Texas?

“A little bit similar since it’s the 550 package, but it’s not going to be as one groove-ish fighting for the first lane of that (traction) spray, like it was at Texas. You are going to be able to widen out and race all over the track, so hopefully that should be a little better and we can stay up front and have a shot there.”

Talk about this weekend at Kansas Speedway and your expectations on the track.

“Kansas has been a good place for our sport. You know the crowd, the reception, the racetrack, the community has really built up around the racetrack there over the last 10 years, or so. It’s been a lot of fun to see all that happen and I’m looking forward to the race. It’s been a great racetrack for us, lately. We’ve had some good runs there once the track aged. We’ve kind of seemed to maybe have figured out the place a little bit better. And, you know, we’re looking forward to the opportunity of being able to go out there and hopefully get ourselves a win with our M&M’S Halloween Camry.”

● Above The Cutline: Sunday’s Cup Series race at Kansas marks the second race of the Round of 8 of this year’s playoffs. Busch’s stage win and eighth-place finish at Texas last week helped boost him to fourth in standings, eight points above the top-four cutline. Kyle Larson won last weekend’s race and is the first driver eligible for the Championship 4 Nov. 7 at Phoenix Raceway.

● All in the Stats: Busch has two wins, nine top-five finishes and 13 top-10s and has led a total of 404 laps in 27 career Cup Series starts at Kansas. Busch’s average Kansas finish is 15.1.

● 222 and Counting: Busch will be aiming to add to his record 222 overall wins among NASCAR’s top three series this weekend at Kansas. In addition to his 59 Cup Series wins and 102 in the Xfinity Series, Busch has 61 wins in the Camping World Truck Series.