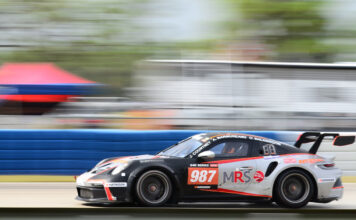 Sebring, FLORIDA – November 23, 2021 – The inaugural Hankook Tires 24Hour of Sebring produced a textbook example of Endurance Racing and a fine result for the MRS-GT Racing team, who capped off their racing season in North America with a well-deserved runners-up spot in the GTX class. MRS-GT entered two cars in the race, with the No. 987 Porsche GT3 Cup 992 car driven by Jeff Courtney, Alexander Marmureanu, Omar Balkissoon and Sebastian Moreno finishing second in class on podium. The No. 989 Porsche GT3 Cup 992 driven by Raulino Kreis, Jr., Pedro Torres, Robert Lorndale and Jeronimo Guzman led just under half the race before an unfortunate early retirement.

MRS-GT Racing is the German Sports Car outfit with a terrific record in Porsche GT and sports car racing in Europe. A close ally of Porsche Motorsport, Team MRS has no fewer than 16 Porsche 911 GT3 Cup and 911 GT3 R race cars participating in various series around the world – supplemented by their entry in this year’s Yokohama Porsche Cup. The German outfit has already competed for over 13-years in the 24H SERIES, most recently picking up a 991-class podium finish at the season opener in Dubai with Saif Alameri, Jukka Honkavuori and three-time overall event winner Jeroen Bleekemolen before switching to the brand-new 992-gen Porsche 911 GT3 Cup for the Hankook 12H HOCKENHEIMRING. Alameri, Nikolai Gadetskii and Thierry Vermeulen went on to secure 5th in-class at the Hockeheim round.

The effort is spearheaded by the brilliant Karsten Molitor. The MRS-GT chief expressed delight with the Sebring weekend, “I’m really happy and proud to have been part of the first ever 24-hour race for sports cars at Sebring. It was under difficult circumstances because we had some logistical issues but it turns out that driving for MRS was the best idea you can have because our team has complete experience and we were ready to go at the track on the first day.” Reflecting on the weekend’s action he added, “We had some issues. We had an accident but in the end all our Drivers were unbelievably happy and this is the positive thing I’m going to take from here.”

Intermittent showers throughout the 24 hours meant a wet track for much of the race while logistical issues in the build-up provided a challenging weekend for everyone. The start of the race was delayed but it nevertheless proved a triumph for MRS-GT. The Sebring surface is a mixture of new and old concrete with little irrigation on a very flat surface, and the rain showers that visited the track intermittently gave a wet track for durations of the race.

Karsten added, “The staff on track are brilliant. They’re giving everything. The track is not easy in the rain because there is no drainage so there was a lot of standing water which creates aquaplaning which we don’t have so much in Europe. But the people at the track did everything so we could continue. In general, we like the rain! We had some mistakes in the dry but not in the rain. Sebring is well known for good weather but this weekend we had ‘liquid sunshine’ but it was great.”

The late-day race start meant it was dark about an hour after the race went green but improved lighting at Sebring International Raceway meant visibility remained good. The 987 MRS-GT improved its position steadily through the race and with just over four hours to go, the race restarted behind the pace car with Sebastian Moreno behind the wheel after a refuelling stop. At that point the car had completed 377 laps for position P2 in class behind only the Lamborghini Huracan and had set a best lap of 2:08:565. With 70 minutes remaining on the clock, Alexander Marmureanu had taken over from Jeff Courtney with the car closing in on P13 with the Heart of Racing Aston Martin Vantage driven by Roman de Angelis in the pits. Marmureanu was able to overhaul the Aston and quickly put 7 laps between the MRS GT car and his rival. He then guided the car home for P13 overall and P2 in class for a place on the podium.

Early on, the No. 989 MRS GT Porsche was running P8 overall and P1 in class, looking set for a highly placed finish. Jeronimo Guzman pitted for fuel and handed it over to Brazilian driver Raulino Kreis, Jr. During the early morning around 3:40 a.m. at the end of his driving stint, Kreis crashed into the barriers at the exit to Turn 1. The car had to be recovered back to the paddock and retired from the event. The No. 989 had led its class for almost half the race and the team effort was working very well together, so the disappointment was felt deeply by all those concerned. It meant an early finish for drivers Pedro Torres and Robert Lorndale as well.

The event was a triumph and CERVENTIC and Hankook Tires are to be congratulated for their tireless efforts that made the race possible. It’s been a very good first season in the US for MRS-GT and MRS GT will be back competing in the Porsche Cup series next year when the calendar of the Porsche Carrera Cup North America includes the famous street race in Long Beach, CA and a Championship race at Laguna Seca.

MRS-GT is adding another vehicle to its range and so will be attacking with three 992 Porsche Cup vehicles. If you are interested in discussing options and ways to get involved with MRS in either North America or European programs, reach out to Karsten Molitor on the MRS GT-Racing website at https://www.molitor-racing.de/.