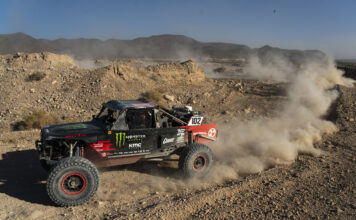 It may have run in December instead of March, but 2021 was another edition of the Mint 400 to remember for Monster Energy athletes. Dustin Jones kicked off the festivities with an overall UTV victory on Friday, while on Saturday, Casey Currie scored top honors in his Trophy Jeep in Class 1 after qualifying first for the Great American Off-Road Race.

Befitting the Mint 400’s status as one of the most prestigious in the entire sport of desert racing, scoring the UTV Pro Turbo win was anything but easy. Jones was engaged in a battle for the top spot with half a dozen other racers, including fellow Monster teammate Phil Blurton, through four laps on a grueling 100-mile course. In the end, the driver who won his first Mint 400 in his very first try six years ago finally added another win here with a time of 8:28:31.149, more than 10 minutes faster than any other entry in Friday’s Limited races.

That set the stage for Saturday’s Unlimited races, which ran their qualifying segments on a separate but adjacent course on Friday while the Limited races ran. Currie qualified first in Class 1 and never looked back, posting laps that were well faster than any of the other competitors in the class. When all was said and done, Currie’s time of 8:18:01.855 was more than an hour faster than any other driver in the division.

Other Monster-backed athletes to finish on Friday included Blurton, who overcame mechanical difficulties to score a sixth place result in the UTV Pro Turbo class, and UFC fighter-turned off-road racer Donald “Cowboy” Cerrone, who scored the runner-up finish in the UTV Rally class. On Saturday, meanwhile, Bailey Campbell joined Currie in Class 1 and added another top five finish to the Monster haul for the weekend.

For those who can’t get enough of the Mint 400, never fear: after pandemic concerns postponed this year’s race until December and added nine months to the wait, racers and fans won’t need to be patient for nearly as long next time around. The Great American Off-Road Race returns to its traditional second week in March for its 2022 running, with numerous Monster Energy athletes preparing to return to the Nevada desert once again to add to the trophy haul.

Based in Corona, California, Monster Energy is the leading marketer of energy drinks and alternative beverages. Refusing to acknowledge the traditional, Monster Energy supports the scene and sport. Whether motocross, off-road, NASCAR, MMA, BMX, surf, snowboard, ski, skateboard, or the rock and roll lifestyle, Monster Energy is a brand that believes in authenticity and the core of what its sports, athletes and musicians represent. More than a drink, it’s the way of life lived by athletes, sports, bands, believers and fans. See more about Monster Energy including all of its drinks at www.monsterenergy.com.

Official Release
Previous articlePitbull to Perform Concert as Part of NASCAR’s Busch Light Clash at the Coliseum Festivities
Next articleDriving Home for Christmas: What to Check Before You Set Off