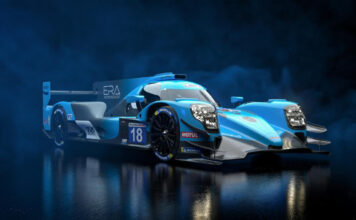 INDIANAPOLIS, Ind., (January 18, 2022) – IMSA WeatherTech SportsCar Championship team Era Motorsport captured hearts around the globe last year when the team secured their first series victory at the iconic Rolex 24 At Daytona. Sporting a livery designed by a six-year-old Canadian race fan, the LMP2 team proudly demonstrated they were a force to be reckoned with. The time has come for Era Motorsport to defend their unforgettable win. This week, the team arrives at Daytona International Speedway for a two-week stay to conduct the first series-wide test of the season, the Roar Before the 24, followed by the first race of 2022, the 60th Rolex 24 At Daytona.

As previously announced, the race-winning Rolex lineup will remain the same as the previous year, with Dwight Merriman, Ryan Dalziel, Kyle Tilley, and Paul-Loup Chatin commanding the No. 18 LMP2 Oreca. Merriman and Dalziel, who will make a bid for the full LMP2 championship, hold an additional win together from the 2021 SportsCar Weekend at Road America.

The team had a whirlwind 2021 season, participating in and winning the Asian Le Mans Series LMP2 championship, running select NASCAR races, entering the world of Rally racing, and continuing the team’s vintage and historic racing programs. It has been extremely busy at Era’s Indianapolis base with a short off-season of fewer than two months to prepare for the approaching year ahead.

The 2022 IMSA WeatherTech entry will be identifiable by its light blue and grey livery, flaunting a new, flowing style with the team’s traditional colors.

The 2022 IMSA field has reached capacity, making the Era Motorsport group one of 60 entries competing in the back-to-back events. Currently, ten entries are slated to compete against Era Motorsport in the LMP2 class, with forty drivers from eleven different countries competing on Daytona’s seven-turn, 3.81-mile roval course.

IMSA 101
The IMSA WeatherTech SportsCar Championship’s Rolex 24 At Daytona will again feature five different classes competing in the same on-track event. The three prototype classes are to again be identified as DPi, LMP2, LMP3, and the two Grand Touring classes are GTD Pro, GTD. As the most technologically advanced cars on track, the DPi cars will be the fastest class and likely feature all-professional driver lineups. In the second prototype tier, the LMP2 class also runs purpose-built prototypes and provides a mixture of professional and amateur-ranked drivers. Stepping down into LMP3, these cars have slightly less power, in a class geared towards the development of amateur drivers, who share driving duties with professionals. The GTD Pro class is new this year following the departure of the GTLM class. GTD Pro will offer factory teams and all-pro-rated lineups. The GTD class will consist of the same class of cars, but the drivers will be a mixture of professional and amateur drivers.

The keys to successful strategy over the course of the 24-hour race will not only be acquiring the right combination of drivers, but the physical and mental endurance of the car, crew, and strategists in pit lane. The timing of pitstops and use of tire allocation will also be vital, along with the starting position.

Tune In
The 2022 race season brings a new TV and streaming package, with IMSA Racing coverage residing on NBC, the USA Network cable channel, and flag-to-flag streaming moving to Peacock. Most viewers outside of the USA can stream live on imsa.tv or visit IMSA’s International Coverage page for local listings. Fans worldwide can listen to IMSA Radio’s free coverage of all WeatherTech sessions by listening online or XM 202 or the Sirius XM Web or App at 992.

The Motul Pole Award 100 will air live on Sunday, January 23 at 2:00 pm Eastern on Peacock. The Rolex 24 At Daytona will begin television coverage on Saturday, January 29 1:30 pm eastern, then channel hop to Peacock and the USA Network. Fans who want flag-to-flag coverage can stream via a Peacock Premium Subscription, and international audiences can tune into imsa.tv.

DRIVER QUOTES
Dwight Merriman
Like everyone, I’m excited to get back to racing. The Rolex 24 is always a special event, and after winning last year with such a hardworking group of people was unforgettable. We have a lot of strong competition this year, so we really have to execute well and make the most of our on-track testing at the Roar.

Ryan Dalziel
I’m looking forward to getting back into the Era LMP2 Oreca. It feels like forever since Petit Le Mans. Obviously, we are returning as the most recent Rolex 24 winners and with the same car, team, and drivers, but the field is massive for 2022, so it’s going to be a really tough one. We know we are prepared and ready to defend our crown.

Kyle Tilley
To return to Daytona after such an incredible win last year is really exciting. The competition this year is going to be extremely tough, but we have assembled a great group. We are keeping my the same driver lineup which proved to be really effective, and the crew is great, so I think we have a strong chance again. It’s a 24 hour sprint race. If we keep our noses clean, we will be right there at the end.

Paul-Loup Chatin
I am really happy to join back my teammates and all the Era Motorsport crew for Daytona. The Roar will give us the opportunity to work already for the Rolex 24, which is the most important. The average level this year is higher compared to 2021. Because of that, the challenge is bigger but I am really confident because the team worked a lot the previous 12 months. We will give everything to win a second time in a row.