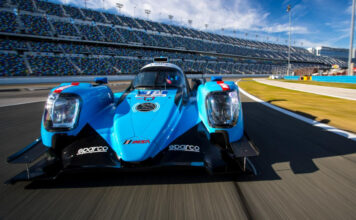 DAYTONA, Fla., (January 25, 2022) – With the Roar Before the 24 complete, all eyes at Era Motorsport are focused forward on this week’s main event: the 60th Rolex 24 At Daytona. The 2021 LMP2 class winners are looking for a repeat win in the No. 18 Oreca, driven by Dwight Merriman, Ryan Dalziel, Kyle Tilley, and Paul-Loup Chatin. Era Motorsport is one of three cars on the 2022 entry list where all drivers hold wins at the famed event.

The Indianapolis-based squad took full advantage of the three-day test at Daytona International Speedway last week, gaining valuable track time and opportunities to further develop their machinery. This marked the second year that the IMSA WeatherTech SportsCar Championship followed a newer qualifying format, offering a 100-minute race where the results of which would set the grid for this week’s Rolex 24 At Daytona.

While Era Motorsport had a strong speed in testing, a drive-plug issue during Dwight Merriman’s opening stint put the car far down the charts, without any hope of getting pole position. Determined to make the best of the situation, the team put secondary driver Paul-Loup Chatin behind the wheel and finished the car’s fuel load, gaining additional data and experience on track.

In 2021, Era Motorsport ran a clean and consistent race in the Rolex 24 At Daytona, starting third in the LMP2 class and tenth overall. The team focused on keeping the car clear from contact, running speedy lap times, but avoiding unnecessary risk. The strategy remained resolute into the night, and once morning arrived, the drivers, engineers, and crew rolled up their sleeves to dig in and fight to the end. As the race clock crept closer to the 24-hour mark, Era Motorsport closed the gap on the Tower Motorsports car, and with the stronger fuel strategy, outlasted the competition to take the lead in the final 30 minutes. Paul-Loup Chatin drove to the checker flag, earning the team’s first win in the IMSA WeatherTech SportsCar Championship. To make the win even more special, the team was sporting a livery designed by a six-year-old race fan, who will be present at this year’s race to cheer on the squad once again after attending the 2021 season finale at Petit Le Mans.

With a full-capacity field of 61 cars across five classes, steering clear of contact in order to be present to again fight in the end will reamin the focus of Era Motorsport, and likely the rest of the field. Last week’s qualifying race gave participants and fans a glimpse of what may be in store for the 24 hours of racing on Saturday. Multi-class traffic proved to be a stronger challenge than normal in the opening laps, with every competitor heavily vying for position cross Daytona International Speedway’s 3.87-mile road course.

With qualifying out of the way, race week will be filled with only practice sessions, giving competitors four separate sessions to continue to improve race craft and car balance before the race goes green on Saturday, January 29 at 1:40 pm Eastern. The race will stream live in its entirety on Peacock, NBC Universal’s online streaming platform. On U.S. television, the race will start live on NBC before airing select blocks live on USA. International audiences can visit IMSA’s international coverage page to find local listings.

DRIVER QUOTES
Dwight Merriman
We have assembled a great team and are well prepared after all their hard work. I’m very excited for the race and can’t wait for the green flag.

Ryan Dalziel
We rolled off the truck with a solid car and chipped away each session to slowly find speed. By Sunday’s race, we were a top-three or four car speed-wise, so I feel really good about where we will start the race weekend. The team is very much the same group as last year so having that continuity puts us in a great position to defend our Rolex 24 title.

Kyle Tilley
I’m very excited to get started this coming week! We worked hard during the Roar to have a car that was easy to drive over a long stint. The crew and engineers have been flawless so I think it’s all looking good! As with any 24-hour race the important thing will be to minimise any mistakes and focus on traffic management

Paul-Loup Chatin
I am really happy about the work we all did during the Roar. We have still some small details to adjust but I am confident for the big one. Like always, the goal will be to do our own race and to see where we are for the finals hours and to put it all together at the end to try to grab a second win in a row.