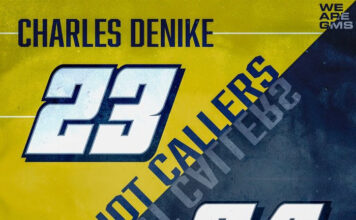 Statesville, NC – GMS Racing is proud to announce its NASCAR Camping World Truck Series crew chief pairings ahead of the upcoming season. The two-time championship winning team plans to run two full-time entries in 2022, with the No. 23 driven by veteran Grant Enfinger and the No. 24 driven by Sunoco Rookie of the Year contender Jack Wood.

Grant Enfinger’s No. 23 Champion Power Equipment Chevrolet Silverado will be led by Charles Denike, who has two NCWTS victories under his belt. Charles spent nearly ten years in the US ARMY as an engineer before making the decision to chase after a career in motorsports. Denike has been a key part of the team since 2016, and most recently called the shots for Tyler Ankrum during the 2021 season. Notably, both of his wins as a crew chief have been delivered by drivers in GMS Racing Silverados at Charlotte Motor Speedway (Chase Elliott) and Bristol Motor Speedway (Sam Mayer).

“The 2022 race season is a great opportunity for Grant and I, and we both plan to make the most of it. We have assembled a new team and the energy is high. We have the common goal to return to victory lane and contend for the championship at Phoenix Raceway at the end of the season. With the great support from Champion Power Equipment behind our team, I feel that we are more ready than ever to chase after our goals.” said Denike.

Jack Wood’s No. 24 Chevrolet Silverado will be led by veteran NASCAR crew member and longtime GMS employee, Tom Ackerman. Ackerman has played an integral role within the GMS Racing campus, most recently serving as the team’s Technical Director. As a crew chief, Tom has called the shots for numerous NASCAR Cup Series and NASCAR Camping World Truck Series veterans over the years.

“This year is going to be one of the most crucial years of Jack Wood’s young career. I am excited to work with him in his first full season, and am especially looking forward to returning to some of the tracks that he raced at for our team last year. Jack is young and hungry, and it is going to be a fun opportunity to see what he is capable of with the additional track time in practice and qualifying sessions. I believe that we have a shot to contend for some solid finishes throughout the season.” remarked Ackerman.

The 2022 NASCAR Camping World Truck Series season kicks off at Daytona International Speedway on Friday, February 18th, with the running of the NextEra 250. Fans can stay up to date with the two GMS Racing NCWTS drivers by following along across all social media platforms with their official handles @GrantEnfinger and @DriverJackWood.