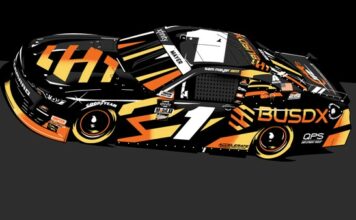 Mayer to Pilot No. 1 BUSDX Chevy in Xfinity Series at Michigan

MOORESVILLE, N.C. (May 11, 2022) – JR Motorsports announced today the addition of BUSDX as the newest partner of the No. 1 team with driver Sam Mayer. BUSDX, a digital staking and rewards token built on the Binance Smart Chain, will be featured as Mayer’s primary partner in the NASCAR Xfinity Series event at Michigan International Speedway (Aug. 6).

Headquartered in Detroit, BUSDX offers a crypto token which automatically distributes 10% rewards to every holder in Binance USD (BUSD), a regulated, fiat-backed stablecoin pegged to the U.S. dollar. In essence, token holders will be able to generate revenue just for holding BUSDX in their wallet. BUSDX token holders will also be able to swap, buy, or sell their tokens on decentralized exchanges to fiat. To date BUSDX has distributed more than $1 million in BUSD to its token holders.

“We are excited to be partnering with JR Motorsports and supporting Sam Mayer in the No. 1 BUSDX Chevrolet,” said Jason Robert, CEO of BUSDX. “Sam is an extremely talented driver, and JR Motorsports is a championship-caliber team. We are thrilled to have them showcase our brand.”

The hot-handed Mayer has been strong in the 11 races this season, racking up five top-five finishes in the last six races and six top-10 finishes this season. The 18-year-old Franklin, Wis. native sits seventh in the championship standings.

“I’m really looking forward to hopping behind the wheel of this BUSDX Chevrolet at Michigan,” Mayer said. “With their headquarters being so close to the track, it’s like a home race for them. It’s sure to be a huge weekend and hopefully we can celebrate with them in Victory Lane at the end of the day.”

Mayer will debut the No. 1 BUSDX Chevrolet Camaro at Michigan International Speedway on Saturday, Aug. 6 with broadcast coverage at 3:30 p.m. ET on USA Network.

ABOUT BUSDX:
BUSDX Is The Native Token That Fuels Our Product Ecosystem. Users are required to hold/stake/pay with the BUSDX token to access our products. X = 10%, BUSDX is a rewards token that was created on the BNB Chain, with a mechanism that distributes 10% rewards in BUSD to holders automatically. BUSDX has quite a few utility products, such as a Staking dApp, Launchpad, NFT Marketplace, DEX Swap, and Virtual Payment System. All of our products were developed to create additional volume in the BUSDX Ecosystem, resulting in the distribution of more BUSD rewards.