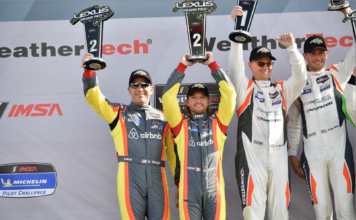 Lexington, Ohio (15 May 2022) – Jr III Racing, the Charlotte-based racing team and full-service automotive shop, successfully completed a double-duty weekend with three cars on the entry list between the IMSA WeatherTech Sports Car Championship and the IMSA Prototype Challenge (IPC). The Lexus Grand Prix of Mid-Ohio weekend was a productive one for the team, with a competitive outing in IPC on Sunday morning ahead of a run to the podium and provisional points lead in the IMSA WeatherTech SportsCar Championship.

After a two-month hiatus with the LMP3 class, Garett Grist and Ari Balogh picked up right where they left off in Sebring as they took the No. 30 Airbnb Ligier JS P320 to the podium. Good race pace, well-executed pit stops and strategy, and some prudent fuel saving all added up for a run to second place.

Balogh opened the race from behind the wheel and managed both his pace and the extensive traffic in the four-class event to make forward progress up the timing charts. Grist took over the controls and returned to action sixth in the order before moving up to second on board the No. 30 Ligier.

Grist navigated multiple contacts during his two stints but was able to keep making progress. That rough and tumble action continued through the last lap as he was hit off track and into the grass, but was able to recover to cross the line in second to come home with a second consecutive runner-up finish after the team opened the year with a run to second in the 12 Hours of Sebring.

Jr III Racing now leads by seven points in the provisional IMSA LMP3 class championship points. This is the third WeatherTech Championship podium in a row for the fairly new racing team, including the second place finishes at the Twelve Hours of Sebring in March and the 2021 Petit Le Mans at Road Atlanta

“You know, luckily we didn’t run out of fuel in the end so we just got home,” said Grist. “It was an amazing call by the team. Once again, great pit stops by the guys and car prep is always 100%. Ari’s (Balogh) stint was incredible, just incredible. We made massive improvements all weekend long. With second again, that’s three WeatherTech races in a row, all three of our WeatherTech races second too.”

Jr III Racing will return at Watkins Glen International for the six-hour endurance race during the weekend of June 24-26.