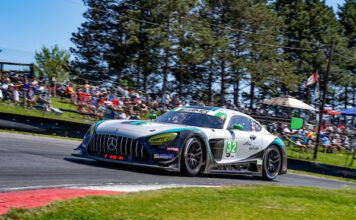 In a two-hour-and-40-minute race run in hot and humid conditions, both Korthoff and Winward showed solid pace and an even stronger ability to shake off some in-race setbacks.

The competitive performance showed from the drop of the green flag when McAleer jumped to the lead from his outside front row starting position. McAleer led the first 33 laps before pitting from second place one hour into the race to hand off to Skeen.

After a well-executed stop by the Korthoff team, Skeen returned to the race and continued to battle for the lead in the top five. He was less than 30 minutes into his race-closing stint when he returned to the pits from third place for a suspected cut left-front tire.

Another solid stop by the team quickly put Skeen back in the race but the No. 32 was now deep in the GTD top-10 after the unscheduled stop under green-flag conditions.

The Winward No. 57 also moved off to a good start before encountering some trouble of its own. Starting driver Ward worked his way up to fifth place but spun off course late in the first hour and lost several positions despite quickly rejoining the race.

Both teams entered the race’s final hour down in the GTD running order but determined to make up as many positions as possible. Winward’s closing driver Ellis passed Skeen for position just four laps from the finish and the two Mercedes-AMG GT3 entries took the checkered flag in sixth and seventh place respectively.

A few hours after the race finish, however, the competitor that took the checkered flag first failed post-race technical inspection and Winward and Korthoff joined the rest of the GTD field in officially being moved up one position.

The fifth-place result is Winward’s best finish in what has been a challenging season while Korthoff’s move up to sixth place gave the GTD title contenders even more championship points.

The No. 32 team and drivers left Mid-Ohio back on top of the GTD team and driver championship standing after out qualifying and finishing three race positions ahead of their nearest challenger.

Topping the championship standings following the year’s opening races at Daytona and Sebring, the Korthoff No. 32 team and drivers proved they are legitimate championship contenders by stepping up to lead the points race again for the second time this season.

McAleer and the No. 32 team hold a 12-point advantage over the second-place team and drivers heading into the next race at Detroit’s Belle Isle Park, June 3 – 4, as part of the Detroit Grand Prix.

Mike Skeen – No. 32 Team Korthoff Motorsports Mercedes-AMG GT3: “We had a great start with Stevan leading a bunch in the first hour. We had a really strong car, and the team gave us a great Mercedes-AMG GT3 with great pace for the weekend. We were really looking for a good finish, hopefully being on the podium again, but, unfortunately, we lost a tire and had to pit. That put us on the back foot a little bit, but we just kept fighting through it, getting a little creative with strategies and the guys kept executing in pit lane. In the end we were able to get through it with some decent points, retake the championship lead and salvage a good finish.”

Philip Ellis – No. 57 Winward Racing Mercedes-AMG GT3: “It’s been a very unlucky season so far. Quite a frustrating one because we have always had great pace, and the drivers, team, pit stops and strategy have all been on point too. So far, we have yet to really put it all together, and even in the Mid-Ohio race it didn’t work out perfectly like we hoped it would. In comparison to this year’s other races, however, Mid-Ohio was a lot cleaner and the result shows. It’s definitely something to build on. The Mercedes-AMG GT3 performed quite well. It seems to suit the track nicely. It’s a very flowing track, my first time there, but I really enjoyed it in the car. I had a good time on the race track. We were fast but couldn’t really do the fuel savings some of the cars around us did, but for sure it was a good performance from the car. I hope we carry that to Detroit and through the rest of the season.”