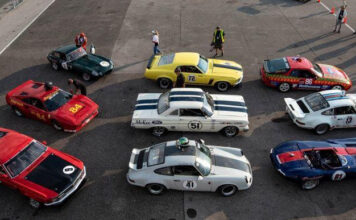 The overall and International-class victory went to Larry Ligas who crossed the finish line a little over a second ahead of a competitive field in his Predator Performance 1961 No. 61 Jaguar XKE Roadster.

Ligas held off Porsche-class winner Mike Banz who was the first of two Heritage Motorsports teammates to complete the overall podium in his 1974 No. 13 Porsche 911 RSR.

The overall podium was completed by Aaron Nash in third, guest driving in the Heritage Motorsports 1973 No. 41 Porsche 911 S/T owned by Craig Sutherland. Nash was second in the Porsche class and joined winner Banz and Colin Dougherty, who drove a 1986 No. 86 Porsche 944 Turbo Cup to third, on the Porsche podium.

Last year’s SascoSports American class winner at Barber, Jeff McKee, capped a competitive run in this year’s race with a second-place class finish while rounding out the overall top five in his 1964 No. 51 Ford Falcon prepared by Olthoff Racing.

The American class was an all-Ford show with third going to Craig Ross in his 1970 No. 72 Cross Ross Boss Racing Ford Mustang Boss 302

The International top-three included second-place finisher Tom Shelton in his 1975 No. 84 Ferrari 308 GTB and third-place finisher Don Norby in his 1961 No. 7 Jaguar XKE from Predator Performance.

The day’s feature races include the first of the weekend’s pair of Super Vee sprints at 3:55 p.m. CDT and the HSR Stoner Car Care Global GT and HSR Classic RS Cup races that compete simultaneously on the 2.380-mile Barber road course beginning at 5:10 p.m. CDT.

Spectator tickets are available exclusively at the Barber Motorsports Park main gate Saturday and Sunday for $15 daily.
About HSR: Now an International Motor Sports Association (IMSA) property, Historic Sportscar Racing (HSR) was formed in the mid-1970s with an event at Road Atlanta. There was one goal then and it remains true today: to celebrate the race cars from the past. As a “time machine” of sights and sounds, HSR provides a venue for competitors and spectators alike to share in the wonderful history and excitement created by the cars that competed at race tracks around the world. HSR currently sanctions eight vintage and historic racing events at some of the world’s most renowned race tracks, including Road Atlanta, Sebring International Raceway, Daytona International Speedway and more. The complete schedule and full event information can be found on HSR’s website at www.HSRRace.com. Look for the HSR Channel on YouTube and follow HSR on Facebook at www.Facebook.com/HSRrace/ and on Twitter and Instagram at @HSR_race. A dedicated website for the Classic 24 Hour at Daytona presented by IMSA is available at www.Classic24hour.com.