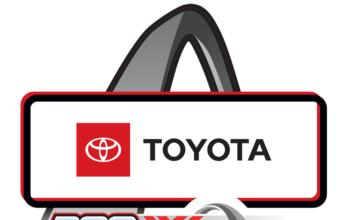 Full of Energy: Bucked Up Energy Drink and its sister products will continue their role as the primary partner of Graf’s No. 07 Ford Mustang this weekend.

Portland International Raceway is the 11th race of 2022 but is the 42nd race overall in a multi-year, multi-race deal with the former ARCA Menards Series winner.

For the second time this year, the team will promote Bucked Up’s Buck Shot Energy

You don’t give up. Neither should your energy shot. Buck Shot is built from the ground up with one frame in mind. Building an energy shot that can hammer out as many hours of work as you already have to punch in. An energy shot that delivers quality, focused, clean energy.

Buck Shot Energy. Because five is barely enough time to clip the red wire. You have too much to conquer to worry about zeroing out on energy—crashing. When your sights are set on energy, one good shot is all it takes. Buck Shot.

About Bucked Up Energy: Bucked Up started in 2013 when twin brothers Ryan and Jeff Gardner started marketing a product called Deer Antler Spray. After selling thousands of bottles to GNCs nationwide, the company morphed into what is now Bucked Up, a full-fledged vitamins and supplements manufacturer.

The company has gone from its humble beginnings to becoming the No. 1 best-selling pre-workout brand that’s available in over 10,000 stores worldwide.

Plenty Of Other Bucked Up Products Available Too: Don’t forget that Bucked Up Energy now offers more than 10 quenching options, but several of their popular flavors include Rocket Pop, Gym ‘N’ Juice, Mango Tango and Pink Lemonade now include low-stim options.

Low-stim has the same innovative ingredients that make their OG formula so powerful for focus, mood, motivation and energy. Bucked Up made just one small change and they have been surprised by the resulting epicness.

Boasting a modest of 100mg of caffeine, Bucked Up Low-Stim delivers the same energy, focus, mood, motivation – while reducing the common side effects that come from too-much caffeine, jitters, sleeplessness and anxiety.

Inaugural Xfinity Series Event: The thrills of NASCAR Xfinity Series racing will stop at Portland International Raceway (PIR) this weekend. The June 4, 2022, race event will mark the first appearance of a NASCAR national series in the Pacific Northwest since 2000.

The NASCAR Xfinity Series stop at PIR is not only a major victory for race fans throughout the Pacific Northwest, but also a major boost for the local economy.

The event has a projected total estimated economic impact of nearly $15 million.

Settling In: Portland International Raceway marks the 14th race that the SS GreenLight Racing with Jeff Lefcourt (SSGLRwJL) team embraces their manufacturer switch from Chevrolet to Ford while incorporating its technical alliance with Stewart-Haas Racing.

SHR will supply the organization with race cars while Roush Yates Engines will provide the legendary Ford horsepower. In addition to providing race cars to SSGLRwJL, SHR will also provide technical support for the entire 33-race season.

Additionally, Graf will have NASCAR Cup Series and Stewart-Haas Racing drivers Cole Custer and Chase Briscoe as teammates for select events throughout the 2022 season.

Don’t Forget The New Partner Too: SS GreenLight Racing has added Jeff Lefcourt as a new co-owner of the Mooresville, N.C.-based team, as well as director of business development for the organization.

The noted philanthropist, entrepreneur and real estate developer has deep ties to grassroots racing and was instrumental in helping secure the Stewart-Haas Racing alliance with SSGLRwJL in 2022.

Ready To Get Wet, If Needed: Traveling the West Coast, particularly in the regions of Oregon where the area is prone to wet weather, the NASCAR Xfinity Series race teams are prepared to race in the rain on Saturday afternoon if needed.

Goodyear will bring its 15-inch wet weather radials to Portland for use by Xfinity Series teams, should NASCAR decide that conditions warrant, teams will have five sets of wets available for the event, with a maximum of four sets for the race . . .

Goodyear is bringing the same wet tire that the series competed with at Circuit of the Americas in May 2021.

In addition to the obvious difference of a tread pattern versus Goodyear’s dry weather “slick” tires, the “Goodyear” and “Eagle” lettering on the sidewalls of the wet weather tires is white, not the standard yellow.

Graf has competed in one prior Xfinity Series race in the wet at the Charlotte (N.C.) Motor Speedway ROVAL in October 2020, where he earned a strong top-15 finish in the No. 08 Watchonista Chevrolet Camaro.

After qualifying his car on time, Graf started the race in the 24th position and utilized the race to methodically move his race car inside the top-20, where he maintained his presence early in Stage 3.

Unfortunately, Graf was one of several drivers involved in a restart accident on Lap 109 that regulated the team to a disappointing 34th place finish.

Sneaker Mania: Along with the adrenaline of the Motorsports competition, Joe Graf Jr. also has a vogue for hype sneakers. In his current collection, he owns and wears at least 90 limited edition sneakers – and his collection continues to grow every month.

The current estimated value of his collection tops $100,000.

He will crew chief his 79th NASCAR Xfinity Series race as crew chief on Saturday afternoon and his first at the track nestled in “Rose City.”

Hello From The Other Side: Graf Jr. has a teammate at SS GreenLight Racing with Jeff Lefcourt. Veteran road racer Spencer Pumpelly will drive the No. 08 TicketSmarter Ford Mustang on Saturday afternoon for his first Xfinity Series start of the 2022 season.

Pumpelly, a veteran in the Sports Car World and has prior experience at Portland International Raceway will make his fourth Xfinity Series start of his career.

“The goal for the weekend is to keep getting faster from the start of practice to the checkered flag on Saturday afternoon.

“If we can do that and stay on the track, hopefully, we will leave Portland satisfied and ready to focus on Nashville later this month.”

On 2022 Season: “We’ve had some ups and downs in 2022, but the last three races, in particular, I really think we’ve made some headway with our SS GreenLight Racing with Jeff Lefcourt team.

“I know the finish does not reflect it, but we had a fast car at Charlotte Motor Speedway last weekend with our No. 07 Bucked Up Rocket Pop Energy Drink Ford Mustang. Circumstances beyond our control dictated the finish, not our hard work.

“It may not seem like a lot on the track, but to us, we’re seeing the vast improvements as we continue to adapt to our new technical alliance and I work harder on my craft with more aggressive setups.

“Portland is going to be a little different because of the style of racing we are set to embrace on Saturday, but I’m eager to get back to an oval and cement our presence in a good way for the upcoming summer stretch and second half of the 2022 NASCAR Xfinity Series season.”

As one of the most tenured teams in all of NASCAR, SS GreenLight Racing with Jeff Lefcourt led by team owner and former driver Bobby Dotter and new partner Jeff Lefcourt has been a mainstay entry in the sport fielding entries in either the NASCAR Camping World Truck Series or Xfinity Series competition since 2001.

SS GreenLight Racing with Jeff Lefcourt will continue with a two-car program in the NASCAR Xfinity Series in 2022.