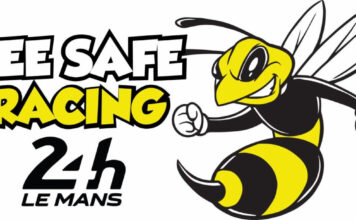 Bee Safe Racing is competing in the GTE-Pro class and going up against three factory-supported teams, each fielding a pair of entries. Despite the challenging task ahead, the No. 74 team and drivers mixed it up with their factory competitors throughout last Sunday’s pre-test and a pair of opening practice sessions Wednesday.

The team showed its pace early in Sunday’s pre-test with the fourth quickest Pro time as the fastest Ferrari in the morning session before closing out the day in the top five.

The first official practice sessions this week saw the team continue to mix it up with the six pack of factory competitors. The Riley team deliberately chose to put in the majority of its pre-race practice work Wednesday and ended the day on a high note when they once again were the quickest Ferrari with the fourth overall fastest time in the night practice session. A variety of typical endurance racing issues didn’t let the team crack the factory top six in qualifying earlier on Wednesday, but the No. 74 Bee Safe Racing Ferrari will start today’s 24 Hours of Le Mans in close touch from the seventh and final GTE-Pro grid position.

“I am very happy with the way the car is balanced and handling right now,” Bird said. “Riley Motorsports and Bee Safe Racing have done a really, really great job in giving us what I believe will be a very strong racing car going forward to tomorrow’s race, and my co-drivers Shane and Felipe have done a really good job. We haven’t necessarily done the most miles out there, but we are making sure the car is in the best place going into to the race. That’s what matters really. In qualifying, there were a couple of smaller issues, traffic and just being unfortunate with some weather, but we know we are where we need to be for race pace.”

Bird is Bee Safe Racing’s most experienced 24 Hours of Le Mans driver and is set for his ninth start in the race. Seven of his previous eight starts came in GTE Ferraris, including his last six-consecutive races at Circuit de la Sarthe that were all in the GTE-Pro division Ferrari 488s.

Van Gisbergen is a championship winning driver just as accomplished as Bird, but the career path for the quick New Zealander has only now led him to Le Mans where he makes his first start in the famous 24-hour race tomorrow.

“This week has been pretty awesome so far,” van Gisbergen said. “It was great to get on track and learn a new car as I am driving a Ferrari for the first time at Le Mans, which is pretty cool. The way the team laid out my first time behind the wheel was really great. I was able to get up to speed and follow the protocol but be patient about it. That’s the thing about Riley Motorsports, they really make you feel comfortable as a driver and not put any pressure on you when you don’t need it yet. It was all good, and Felipe and Sam were great helps for me. I haven’t been here before, and they were really good at helping me along and giving me good advice. They were telling me what we were doing with the car, what the setup changes would be and every time I got in the car it felt great.”

Fraga made his Le Mans debut with Riley Motorsports in 2019 and earned a second-place finish competing with a different team in the GTE-Am class in last year’s 24-hour race. He is the starting driver in the No. 74 for today’s race.

“I’m really excited to start the race,” Fraga said. “It’s a dream for myself to once again be at Le Mans with Bill Riley now and in the Bee Safe Racing Ferrari. Racing in GTE-Pro will be a tough mission, but I feel we have a good car, good teammates and I feel ready to do the job. I can’t wait to push hard and have fun, and I hope we can maybe have a trophy at the end of it.”

MotorTrend+, as well as the MotorTrend TV channel, will be the exclusive outlets in the U.S. and Canada where fans will be able to stream and watch this weekend’s full 24 Hours of Le Mans in its entirety. MotorTrend is available on cable TV systems such as Spectrum and North State in addition to streaming services such as Sling Orange, YouTube TV, Hulu + Live TV, AT&T and DirecTV. The race also can be viewed on MotorTrendondemand.com. A seven-day free trial is available and subscriptions are $4.99 monthly or $44.99 annually.

About The Carroll Companies: Founded and headquartered in Greensboro, North Carolina, more than 30 years ago, The Carroll Companies has since grown strategically and diversified into a real estate conglomerate specializing in land development, construction, ownership, hospitality, management, and publication with a total estimated valuation of over $5.2 billion. The Carroll Companies was founded by Roy Carroll, II in 1983 with a commitment to surpassing industry expectations by providing innovative, cost-effective developments and services. For more information, please visit www.thecarrollcompanies.com and follow the company on Facebook, Twitter, or LinkedIn.