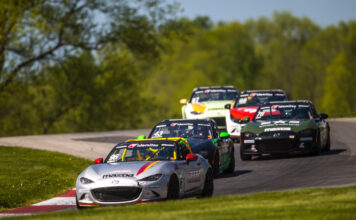 WATKINS GLEN, NY (June 20, 2022) – After four years away, the Idemitsu Mazda MX-5 Cup presented by BFGoodrich® Tires is back at historic Watkins Glen International. As the halfway point of the 2022 season, this 3.4-mile road course may be the place where championship contenders are filtered out.

Current championship leader Jared Thomas (No. 96 JTR Motorsports Engineering) arrives in upstate New York as the only driver to win a race at each of the 2022 venues thus far. This consistency has kept Thomas at the top of the points through the first half of the season.

Like most of the Mazda MX-5 Cup field, Thomas has never competed in a MX-5 Cup race at Watkins Glen.

“I have never raced at Watkins Glen International, but I have tested there,” Thomas said. “I enjoy the high-speed banked corners that WGI has, they are unlike any other place we go on the schedule. The most challenging aspect will be mentally processing what is going on around you because there is no doubt that it will be a high-speed chess match.”

With $250,000 going to the champion, the line of challengers looking to usurp Thomas is long. Selin Rollan (No. 87 Hixon Motor Sports) is the closest contender, just 95 points adrift. Rollan is in his fifth season of MX-5 Cup competition and has finished in the top three of the championship each year but is still searching for that elusive championship title along with the significant prize package on offer from Mazda.

Winning a MX-5 Cup championship isn’t just about being fast, it’s about finishing every race. Drivers will need to keep this in mind at Watkins Glen, because teams will immediately travel to Road America next week for Rounds 9 and 10, leaving very little time to repair a damaged race car between events.

“I think drivers will definitely go in with the mindset of trying to have a clean weekend and to have a raceable car for Road America,” Rollan said. “If they aren’t thinking that, certainly the team owners and managers are! I do think it’s going to be tough though because of the high-speed and high-commitment nature of the track. Hopefully everyone will have a clean weekend at The Glen, but it might not play out that way.”

It took him until Round Five to get his first win of the season, but don’t count out Gresham Wagner (No. 5 Spark Performance). The defending champion knows how to play the consistency game well and is only 335 points behind Thomas. At stake for Wagner: becoming the first repeat champion in series history.

Joey Atanasio (No. 43 Formidable Racing) is coming off of a strong performance at Mid-Ohio Sports Car Course. The rookie missed out on scoring his second podium of the season but did lead his first race laps. He currently leads the rookie standings, 125 points ahead of Mazda MX-5 Cup Shootout winner Connor Zilisch (No. 72 Hixon Motor Sports). Atanasio, Zilisch and the other rookies are all competing for the $80,000 Rookie of the Year prize.

The stage is set for a pivotal doubleheader this weekend at Watkins Glen. Round Seven is set for 12:20pm ET on Friday, June 24, while Round Eight will go green at 10:00am ET on Saturday, June 25. Both races will be streamed live on RACER.com.