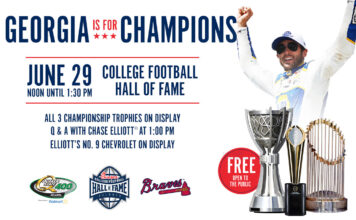 During the free event Georgia sports fans will get an up close view of each piece of championship hardware that their local favorites competed for. Dawsonville, Ga., native Elliott won the NASCAR Cup Series title in November 2020, the Atlanta Braves won the World Series in November 2021, and the University of Georgia won the college football national championship game in January 2022.

Fans in attendance will also get a chance to take part in a Q&A session with Elliott during the event. The 2020 NASCAR Cup Series champion will interact with fans just 11 days before he races on his home track. Elliott’s No. 9 Chevrolet and the Atlanta Motor Speedway pace car will also be on display.

The fan event will begin at 12 p.m. on Wednesday, June 29, and continue through 1:30 p.m. During this time, guests will be able to enter the playing field area at the College Football Hall of Fame – where the championship trophies and Q&A with Elliott will be held – free of charge.

Fans can also see Elliott race at his home track during the Quaker State 400 Presented by Walmart on Sunday, July 10, at Atlanta Motor Speedway. For more information and to buy tickets, visit www.AtlantaMotorSpeedway.com.

About the Quaker State 400 Presented by Walmart weekend:

The Quaker State 400 Presented by Walmart headlines the summer slate of NASCAR racing and entertainment during the Revs & Riffs NASCAR Weekend Music Festival at Atlanta Motor Speedway on July 8-10.

The event features 650 miles of NASCAR thrills and musical performances throughout the weekend, including concerts by Flo Rida, Candlebox, Blackberry Smoke, and more.

More information on the July 8-10 Quaker State 400 Presented by Walmart and ticket availability can be found online at www.AtlantaMotorSpeedway.com.

About the Chick-fil-A College Football Hall of Fame

The Chick-fil-A College Football Hall of Fame is a 94,256-square-foot attraction located in the heart of Atlanta’s sports, entertainment and tourism district. Adjacent to the Georgia World Congress Center and Centennial Olympic Park, the Hall provides visitors with a highly immersive, interactive and engaging experience using a blend of historic college football artifacts and state-of-the-art, interactive multimedia exhibits. The National Football Foundation (NFF) launched the Hall in 1951 to stand as one of the nation’s premier sports shrines, immortalizing the game’s greatest players and coaches as positive role models for future generations. Atlanta Hall Management, Inc., partnered with the NFF to construct and operate the Hall of Fame attraction, which provides a platform for community outreach, education and character development initiatives, as well as serves as one of Atlanta’s premier special event spaces. For more information, please visit www.cfbhall.com.