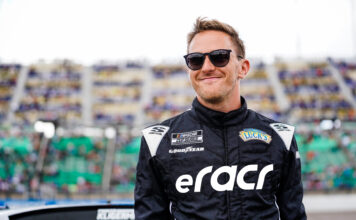 ELKHART LAKE, Wis. (June 23, 2022) – When the Idemitsu Mazda MX-5 Cup presented by BFGoodrich® Tires makes its debut on the NASCAR stage at Road America next weekend, there will be a special, overqualified rookie on the entry list. Truck series driver Parker Kligerman will join the grid for both 45-minute races in Elkhart Lake, Wisconsin.

Kligerman has nearly 200 races in the top tier NASCAR series under his belt, including two Truck Series wins at Talladega Superspeedway. The Stamford, Connecticut native has already raced in the NASCAR Cup Series, Xfiinity Series and Camping World Truck Series so far this year. He regularly drives the No. 75 Food Country USA Chevrolet for Henderson Motorsports in the Truck Series and finished seventh in his most recent race at Sonoma Raceway.

“I’ve expressed interest in racing with this series for a while now, because it looks so fun,” Kligerman said. “These are often the best races of the weekend wherever they go. The racing is immensely competitive, and you constantly see passes you didn’t think were possible. I’ve tried my hand at Spec Miata a few times and had an absolute blast, so I’m eager to get behind the wheel of the MX-5 Cup car. Big thank you to Mazda Motorsports for this opportunity.”

More than just a driver, Kligerman has made a name for himself in sports broadcasting as well. He’s been an NBC Sports pit lane reporter since 2015. In addition to NASCAR races, Kligerman is also a regular on IMSA broadcasts. He hosts a weekly show on the Motorsports on NBC YouTube Channel called ‘In The Wall with Parker Kligerman.’

“It’s a big deal for Mazda MX-5 Cup to be racing on a NASCAR Cup weekend,” Mazda Motorsports Program Manager Jonathan Applegate said. “We wanted to make the most of this opportunity in front of a new fan base by putting a guest driver in a car. Parker is the perfect fit; he’s more than qualified to drive the car, he’s a recognizable figure for NASCAR fans, and he’s a media personality. Knowing he’s a fan of the series made the decision a no-brainer and we’re excited to see what he can do against our series regulars.”

Kligerman will drive the No. 75 entry fielded by Thunder Bunny Racing. He will have two test sessions and two official practice sessions to get acclimated with the car. Race One takes place on Saturday, July 2 at 9:05am CT. Race Two is scheduled for Sunday, July 3, also at 9:05am CT. Both races will be streamed live on RACER.com and IMSA.com/TVLive.

Round 3 Racing Heads to Road Atlanta

Resilient Sheehan and LTK Charge at Road America Trans Am