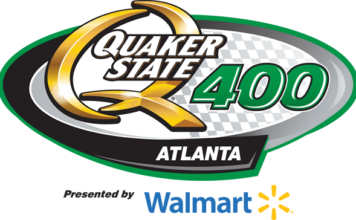 ● Kevin Harvick, driver of the No. 4 Hunt Brothers Pizza Ford Mustang for Stewart-Haas Racing (SHR), comes into Atlanta Motor Speedway on a three-race streak of top-10 finishes. It began with a fourth-place drive June 12 at Sonoma (Calif.) Raceway and continued with back-to-back 10th-place finishes June 26 at Nashville (Tenn.) Superspeedway and last Sunday at Road America in Elkhart Lake, Wisconsin. Harvick is currently 11th in the championship standings, but when it comes to playoff eligibility, he is 17th, one spot shy of the 16-driver playoff field. Eight races are left before the NASCAR Playoffs are set, and at the remaining venues before the 10-race playoffs begin, Harvick has totaled 19 wins, including three at Atlanta.

● Atlanta, however, is a new animal. The 1.54-mile oval was reconfigured over the winter. The banking was increased from 24 degrees to 28 degrees and the track was narrowed from 55-feet wide to 40-feet wide, and it was all covered in fresh asphalt. The goal of the reconstruction was to recreate the kind of pack-style racing seen at the behemoth, 2.5-mile Daytona (Fla.) International Speedway and the even bigger 2.66-mile Talladega (Ala.) Superspeedway. NASCAR Cup Series drivers competed on the new layout for the first time back in March, where Harvick finished 21st.

● Sunday’s Atlanta 400 will mark Harvick’s 34th career NASCAR Cup Series start at Atlanta – the most of any active driver – but only his second on the new configuration. In his 32 starts on the old layout, Harvick led the way with a series-high nine top-fives, 16 top-10s (tied with Kurt Busch), 1,348 laps led and 10,127 laps completed. Who is the all-time leader at Atlanta? That’s none other than Richard Petty. They call him “The King” for a reason: 65 career Cup Series starts at Atlanta with six wins, 22 top-fives, 33 top-10s and 1,827 laps led with 17,513 laps completed.

● Harvick’s first NASCAR Cup Series win at Atlanta was the first of his career, and it came a little over 20 years ago on March 11, 2001. The Cracker Barrel Old Country Store 500 was just Harvick’s third race in a Cup Series car. He started fifth in the 325-lap contest and led twice for 18 laps, including the final six. But Harvick had to earn the win on the final lap and hold off a then three-time champion in Jeff Gordon. Harvick succeeded, outdueling the eventual 2001 series champion to take the win by a scant .006 margin of victory – the seventh-closest finish in NASCAR history.

● Of course, the backstory to that first win is significant. Harvick wasn’t just driving any racecar when he won at Atlanta. He was driving the racecar that less than a month earlier had been piloted by the sport’s titan, Dale Earnhardt. The seven-time NASCAR Cup Series champion died on the final lap of the 2001 Daytona 500. Team owner Richard Childress tabbed Harvick, who was racing for him in the NASCAR Xfinity Series, to pull double-duty and take over Earnhardt’s Cup ride. The No. 3, made iconic by Earnhardt, was changed to the No. 29 and Harvick made his Cup Series debut Feb. 25 at North Carolina Speedway in Rockingham. Harvick started 36th that Sunday at Rockingham, but rain washed over the 1.017-mile oval just 51 laps into the 393-lap race. The race resumed at 11 a.m. ET on Monday, whereupon Harvick drove to a solid 14th-place finish. He then traveled to Las Vegas on Tuesday, married his wife, DeLana, on Wednesday, and was back in a racecar on Friday, competing in both the Xfinity Series and Cup Series events at Las Vegas. After finishing eighth on Sunday to score his first career top-10 in the Cup Series, Harvick headed to Atlanta where the first of his 58 career Cup Series wins was secured.

● Harvick’s two other NASCAR Cup Series wins at Atlanta came with SHR. In February 2018, Harvick won the Folds of Honor 500. He led eight times for a race-high 181 laps on his way to defeating runner-up Brad Keselowski by an impressive 2.690 seconds. Harvick’s most recent Atlanta victory came in February 2020 in the Folds of Honor 500. Harvick again led the most laps, pacing the field four times for 151 laps en route to an even greater margin of victory – 3.527 seconds over Kyle Busch.

● Harvick is also incredibly good at Atlanta outside of the NASCAR Cup Series. He has five Xfinity Series wins at the track, including four in his last six starts at the 1.54-mile oval, the most recent of which ended in victory – February 2018 when he walloped the field in his Hunt Brothers Pizza Ford Mustang, leading four times for a race-high 141 laps and cruising to the win with a 4.183 margin over second-place Joey Logano. In 17 career Xfinity Series start at Atlanta, Harvick has 11 top-fives and 13 top-10s with 973 laps led. And in his two NASCAR Camping World Truck Series starts at Atlanta, Harvick has a win and a second-place finish. He finished second in his Truck Series debut at Atlanta in March 2009, where he led four times for a race-high 68 laps before coming up .122 of a second short of beating Kyle Busch for the win. But in Harvick’s Truck Series return to Atlanta in March 2010, he dominated by leading twice for a race-high 100 laps and this time besting runner-up Kyle Busch by 1.308 seconds.

● The 2022 season marks the 13th year of partnership between Harvick and Hunt Brothers Pizza. The nation’s largest brand of made-to-order pizza in the convenience store industry has sponsored Harvick for years in the NASCAR Xfinity Series and NASCAR Camping World Truck Series. Hunt Brothers Pizza joined Harvick fulltime in the NASCAR Cup Series in 2019 and has been a mainstay in NASCAR’s premier division ever since. With more than 8,000 locations in 30 states, Hunt Brothers Pizza offers original and thin-crust pizzas available as a grab-and-go Hunk A Pizza®, perfect for today’s on-the-go lifestyle, or as a customizable whole pizza that is an exceptional value with All Toppings No Extra Charge®. Hunt Brothers Pizza is headquartered in Nashville, Tennessee, and is family owned and operated. For additional information, visit www.HuntBrothersPizza.com or download the app.

There were a lot of unknowns when the NASACAR Cup Series raced at Atlanta earlier this year. After 500 miles on the reconfigured layout back in March, what are your thoughts for your return visit this weekend?

“It’s just a superspeedway race on a mile-and-a-half racetrack. Things just happen a lot faster, so the decisions have to happen faster, the cars move around a lot more, the corners come up a lot quicker. A lot more just seat-of-your-pants, just, ‘Go here, go there, do this, do that.’ And I think that the way the lines formed and moved and everything happened, you just had to get used to a different style of race than we’ve had before.”

Did the new Atlanta perform like Daytona and Talladega, or was the Atlanta race its own animal?

“It’s got some characteristics of superspeedway racing in the way that you wind up in a pack and you’re holding it wide open. But the way that the bumps and things are there, and the way you have to go into the corner, and the way the race developed, there wasn’t near as much pushing and shoving as there is at Daytona and Talladega.”

How was the grip level at Atlanta, and with a full race weekend under its belt, do you expect it to be better this weekend?

“It’s definitely going to be hotter. Turns three and four were a little bit edgy, but you’re probably going to want just a touch of downforce in your car just to try to make up for some of the heat and lack of grip that’s going to come with just the time of year and the temperature.”

You prepared for Atlanta by spending a decent amount of time on the simulator. How accurate was the sim to what you ended up experiencing when you started turning laps on the real thing?

“It’s a little bit different. You can kind of work on your car and kind of drive around, but the draft is so much faster than driving by yourself. You have to go a lot off of your eyes and just what you see, and the racecar itself is definitely more of a feel thing than anything. So in the end, you have to validate the sim by what you feel in the car and try to make those things as close as possible.”

Official Release
Previous articleDrew Blickensderfer to call 400th Cup event as crew chief at Atlanta
Next articleLegends and Bandolero Drivers Red, White and Cruise to Victory at the Cook Out Summer Shootout