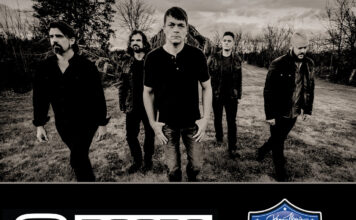 BRISTOL, Tenn. (July 22, 2022) – Popular American rock band 3 Doors Down will get the Bass Pro Shops Night Race crowd revved up on Saturday, Sept. 17, when the Grammy-nominated group performs the pre-race concert in the infield of the iconic Bristol Motor Speedway prior to the start of the NASCAR Cup Series Playoff race. The pre-race concert is scheduled to begin at 5:30 p.m. on the main stage in the infield.

With more than 20 million albums sold worldwide, 3 Doors Down has churned out timeless hits spanning across three decades, including longtime favorites such as “Kryptonite,” “Here Without You” and “When I’m Gone.” In 2021, for the first time ever, the band played The Better Life in its entirety, front to back, along with the rest of their hits marking the 20th anniversary of their debut album.

“We are thrilled to have such an All-American rock band like 3 Doors Down to entertain our guests prior to the green flag dropping for the Bass Pro Shops Night Race,” said Jerry Caldwell, president, Bristol Motor Speedway. “Their songs are so memorable and very popular with NASCAR fans. With their southern rock style, they are the perfect fit here at Bristol, where so many amazing groups have performed over the years.”

The band is no stranger to NASCAR, having performed at multiple tracks on the circuit including Daytona International Speedway and Charlotte Motor Speedway. NASCAR legends Dale Earnhardt Jr. and Tony Stewart, personal friends of the group, were featured in the 3 Doors Down music video “Road I’m On.” Stewart drove a 3 Doors Down sponsored car in 2003 and Earnhardt Jr. also had the band’s logo on the hood of his racecar in races in 2005 and 2008.

It will be the first time that the Mississippi group, headlined by lead vocalist Brad Arnold, will perform in The Last Great Colosseum. As longtime fans of NASCAR, the group can’t wait to make some noise in one of the most revered stadiums in the world of sports and entertainment.

“When our friends at NASCAR and Bristol called the answer was YES!,” Arnold said. “I’ve never been to Bristol but can’t wait to ROCK that iconic track, see some friends and watch the race there that night. Saying I’m excited to play Bristol for the Bass Pro Shops Night Race is an understatement.”

Fans of the band and those guests seeking to get closer to the action can now purchase the new Pre-Race Infield Experience pass, an upgrade ticket for Saturday evening that will allow those guests to enter the BMS infield and enjoy the 3 Doors Down pre-race concert from the front of the stage and be there for the world-famous Bristol Motor Speedway driver introductions, where the Cup Series stars enter The Last Great Colosseum to the sounds of their favorite music. Fans will be able to access the area at 5 p.m. and will be able to stay inside the infield until the last driver is introduced, just prior to the green flag for the famed Bass Pro Shops Night Race.

About Bristol Motor Speedway
Forged amid the scenic mountains of Northeast Tennessee near the Virginia state line, Bristol Motor Speedway is The Last Great Colosseum, a versatile multi-use venue that hosts major auto races, football games, concerts and many other captivating events. The facility features a 0.533-mile concrete oval race track with 28-degree corner banking and 650-feet straightaways that offers racing in several NASCAR touring series, highlighted by two major Cup Series weekends each year. In 2020, the track also served as host of the prestigious NASCAR All-Star Race, and in 2021 began converting to a temporary dirt track each spring to take the Cup Series back to its racing roots. While at the track, fans are offered a unique viewing experience courtesy of Colossus TV, the world’s largest outdoor center-hung four-sided video screen with a 540,000-watt audio system. The adjacent quarter-mile dragstrip, Bristol Dragway, offers more than 50 events annually, including the marquee NHRA Thunder Valley Nationals. The Thunder Valley Amphitheatre presented by Ballad Health transforms Bristol Dragway into a premier outdoor concert venue for the world’s greatest music performers. Three football games have kicked-off inside the oval, most notably the 2016 Pilot Flying J Battle at Bristol, where border rivals the University of Tennessee and Virginia Tech met before an NCAA-record crowd of 156,990. In existence since 1961, Bristol Motor Speedway was purchased in 1996 by Speedway Motorsports, Inc., a publicly traded company that is a leading marketer and promoter of motorsports entertainment in the United States. For more information, please visit www.bristolmotorspeedway.com.