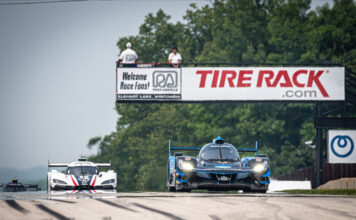 Brownsburg, Ind. (August 2, 2022) — Over the course of the 2022 IMSA WeatherTech SportsCar Championship, a pattern persists for The No. 10 Konica Minolta Acura ARX-05 and drivers Ricky Taylor and Filipe Albuquerque. Whenever they have a difficult race, they win the next. Laguna Seca and Watkins Glen International were prime examples, and they’ll need to do the same at Road America this weekend to shrink the 56-point gap that currently separates them from the championship leaders.

The IMSA SportsCar Weekend at the famous Wisconsin circuit is the second-to-last event of the season and the last sprint race. Wayne Taylor Racing is chasing their first win at the 4.048-mile, 14-turn track and have achieved four podiums in 11 appearances.
Like many drivers, Ricky Taylor enjoys the challenge that ‘America’s National Park of Speed’ presents. He has won with an Acura chassis at Road America in 2020 and knows that returning the top step of the podium this weekend is imperative.

“This weekend is a critical race in the championship,” mentioned Ricky Taylor. “It’s a must win for us to get us in the fight for the championship. Road America is a fantastic track for the Acura, but we need to capitalize. The track is fast and can be a track where overtaking in traffic is quite opportunistic. It’s a track where people can make moves and make things happen. I expect it will be another epic fight for the win.”

Filipe Albuquerque is keen to achieve his first victory at Road America and head into the final round on a high note.

“Road America is an amazing track,” said Filipe Albuquerque. “Last year we were unlucky with a puncture, but we were running well so we know the car can run well there. We are in a situation where we need to finish ahead of our main rivals, the other Acura. So, our goal is very simple, to finish ahead of them and to obviously go for the win. It’s all about championship points with only two races to go, so we want to maximize that, plus Wayne Taylor Racing has never won at Road America, so we are looking to get our fourth win of the season there. We had a lot of ups and downs in the season, but we have three wins which is the most of any team this season. That shows that we can do the job.”

With four Road America podiums as a team owner, like his drivers, Wayne Taylor knows the importance of winning this weekend not only to his team but to securing the Championship.

“We are just focusing on winning as many races as we can,” said team owner Wayne Taylor. “We’ve won three and we’d like to win five this season. We’ve never won at Road America and the drivers and entire team want to win there this weekend. We did just get some BoP changes to our car again, but it’s not even worth discussing, it is what it is. We all want to win, so I’m really looking forward to the weekend.”