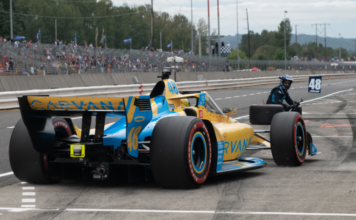 PORTLAND, Ore. (Aug. 10, 2022) – The Grand Prix of Portland at Portland International Raceway (PIR) is less than a month away and will feature nine total races from five different racing series in one action-packed Labor Day weekend, Sept. 2-4.

Stock car racing will headline Saturday’s action as the ARCA Menards Series West returns to PIR for the second time this year. Then the green flag drops on the weekend’s main event featuring the NTT INDYCAR SERIES on Sunday, Sept. 4.

Johnson currently pilots the No. 48 Carvana Chip Ganassi Racing Honda in his second NTT INDYCAR SERIES season. He will look to build on last year’s 20th-place finish in his very first appearance at PIR.

“With the progress we have been making lately, I’m really excited to get back to Portland this year,” Johnson said. “We have come a long way in a season, and I’m just looking forward to seeing the progression each and every week.”

The veteran racer has shown signs of improvement in the back half of his second open-wheel season, which also includes all the oval races this season, as evidenced by a 16th-place finish at The Honda Indy 200 at Mid-Ohio Presented by the All-New 2023 Civic Type R (July 3rd) and more recently by 11th and fifth-place results at Iowa Speedway.

“We made some changes to our thought patterns at Mid-Ohio and have been progressing significantly each week,” Johnson said. “We are focusing more on what I need to feel comfortable in the car, which translates to me being able to push the limits more. The Iowa result was such a morale booster for everyone on the No. 48 (team). It was so fulfilling. We made great strides in Toronto as well.”

The ARCA Menards Series West race at PIR on Saturday, Sept. 3, will give series points leader Jake Drew a chance to win for the second time at the 1.97-mile, 12-turn permanent road course this season. Drew took home his first career checkered flag in a rain-shortened Portland 112 on June 4th and followed that victory up with wins at Sonoma Raceway and Irwindale Speedway.

The 22-year old, second-year ARCA driver of the No. 6 Sunrise Ford Racing machine has put together an impressive 2022 campaign with these three consecutive wins, two straight pole awards and top five finishes in all six ARCA Menards Series West races. The Fullerton, Calif. product credits the team around him.

“I think it’s just how hard the whole team works from the shop to the track,” Drew said. “We’re always doing our best. Even with all the success we’ve had, we’re still just pushing like we’re still hunting down that first win. It makes it fun when we’re doing good, of course. That’s what we’re all here for.”

Drew, who spent his childhood racing go karts before making the jump to stock cars, will approach the upcoming race at Portland full of confidence after winning at PIR in June and earning a pole at the track in 2021.

“I’m hoping it doesn’t rain again. The rain was definitely tricky, but we did race there last year in the dry,” Drew said. “We got the pole last year by a significant amount of time and pulled out some pretty big leads throughout the race. I think the competition will be a little bit closer than it was last year or even in the rain earlier this year, but I still think we have a super strong package. And I can bring 16 years of karting experience along with me as always when we go to the road courses, so that always helps.”

For ticket pricing, grandstand seating locations and additional festival information, visit portlandgp.com. Tickets start at just $20, and children 12 and under receive free general admission and access to the paddock. Stay up to speed on the Grand Prix of Portland on social media all year long by following #PortlandGP.

About Grand Prix of Portland:

Portland International Raceway (PIR) is the home of the Grand Prix of Portland. PIR is a 1.964-mile, 12-turn permanent road course owned by the City of Portland and operated under the Portland Parks and Recreation. Opened in 1960 to host sports car and drag racing, the 268-acre property hosts over 550 events annually including automotive and motorcycle road racing, motocross, cruise-ins and other special events including the Rose Cup Races. PIR has been the site of many memorable Indy car races. Al Unser Jr. won the inaugural one in 1984, and the NTT INDYCAR SERIES returned in 2018 after an 11-year absence with Takuma Sato the winner and another Indianapolis 500 champion Will Power winning in 2019. The Father’s Day race of 1986 featured Mario Andretti victorious over his son Michael on the last lap by less than a second. The closest three-way road racing finish in INDYCAR SERIES history took place at PIR in 1997 when the top three were covered by just 0.055 of a second. The Grand Prix of Portland is owned and operated by Green Savoree Portland, LLC, whose affiliates also promote three additional INDYCAR SERIES races, Firestone Grand Prix of St. Petersburg presented by RP Funding (Feb. 25-27, 2022), The Honda Indy 200 at Mid-Ohio Presented by the All-New 2023 Civic Type R (July 1-3, 2022), and the Honda Indy Toronto (July 15-17, 2022).