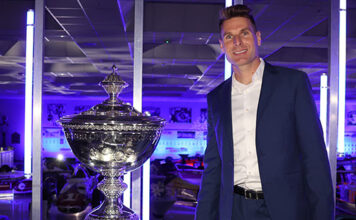 INDIANAPOLIS (Saturday, Sept. 17, 2022) – Will Power and Team Penske stepped into the spotlight again as the 2022 NTT INDYCAR SERIES champions Saturday night during the Victory Lap Celebration at the Indianapolis Motor Speedway Museum.

Power clinched his second series championship with a third-place finish in the No. 12 Verizon Team Penske Chevrolet last Sunday at the Firestone Grand Prix of Monterey at WeatherTech Raceway Laguna Seca. He won his first title in 2014 with Team Penske.

Newgarden and Scott Dixon of Chip Ganassi Racing also were saluted for finishing second and third, respectively, in the standings.

Power led the 2022 season with five NTT P1 Awards for pole, earning the NTT P1 Award as the best qualifier of the season. It’s the fifth time in his career he has won this award. Power also made history last weekend by winning his 68th career pole, breaking a tie with fellow legend Mario Andretti for the all-time INDYCAR SERIES record.

Team Penske drivers Power, Newgarden and Scott McLaughlin delivered nine of Chevrolet’s series-leading 11 victories this season, helping Chevy win the Manufacturer Award for the seventh time since it returned to the series in 2012 and the first time since 2017. Jim Danahy, U.S. vice president, Competition Motorsports Engineering for Chevrolet, accepted the award on behalf of his team.

Christian Lundgaard was honored as the 2022 NTT INDYCAR SERIES Rookie of the Year. Lundgaard, from Denmark, scored one podium finish, two top-five finishes and seven top-10s in the No. 30 Honda fielded by Rahal Letterman Lanigan Racing. He edged David Malukas of Dale Coyne Racing with HMD by 18 points in the standings for first-year series drivers.

Success in Indy Lights Presented by Cooper Tires also was honored this year at the Victory Lap, as in 2022 INDYCAR took over execution and promotion of the series that provides the last step of preparation for drivers aspiring to race in the NTT INDYCAR SERIES.

Andretti Autosport teammates Robb and Matthew Brabham also were honored for finishing second and third, respectively, in the standings.

HMD Motorsports with Dale Coyne Racing owners Henry and Daiva Malukas accepted an honor for their championship-winning team this season in Lights.

Hunter McElrea received the Rookie of the Year Award in Indy Lights. McElrea, from New Zealand, drove to two victories, seven podium finishes and three poles in the No. 27 Andretti Autosport entry en route to finishing fourth in the series standings.

Newgarden and Lundqvist also received the AiM Sports Move Award for their respective series, presented to the driver judged to have made the most dramatic pass of the year.