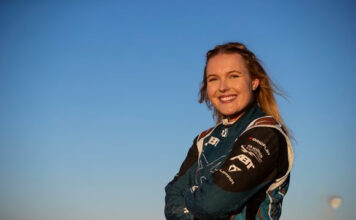 Kleinschmidt has been ruled out of competing in Chile for the rest of the weekend after suffering an injury following a crash in Free Practice 2. The German was taken to hospital as a precaution and stayed in hospital overnight for further checks. Everyone at Extreme E wishes Jutta a speedy recovery.

In a statement, an ABT CUPRA XE spokesperson said: “After her accident in Free Practice 2 Jutta stayed in hospital overnight for further observation. The entire ABT CUPRA XE team is in close contact with Jutta and wishes her the very best.”

The German’s absence means 22-year-old Andersson steps into the vacant seat at ABT CUPRA XE to partner Nasser Al-Attiyah for Extreme E’s first-ever round in South America.

Getting behind the wheel this weekend marks a long-awaited series debut for Andersson. The ACCIONA | Sainz XE Team introduced the Swedish protégé to the championship during the Rookie Test which followed the Enel X Island X Prix in Season 1, while Andersson was all set to debut for XITE ENERGY Racing in NEOM at the Season 2 opener before being ruled out with COVID-19.

As well as finally getting the opportunity to debut in Extreme E, Andersson is already enjoying a strong 2022 season. She is currently competing in World RX as the first permanent female competitor in WRX history with Construction Equipment Dealer Team.

Last week, Andersson recorded her best WRX result to date by finishing third in Portugal – becoming the first-ever female driver to step on the podium in the championship’s history.

The Swede is also no stranger to several names on the grid. At the halfway point of the World RX season, Andersson sits sixth in the standings just 10 points behind JBXE’s Kevin Hansen in fourth and 14 points behind Genesys Andretti United Extreme E’s Timmy Hansen in third.

Klara Andersson said: “Competing for ABT CUPRA XE this weekend came as an unexpected Friday night surprise to me. While I wish Jutta all the best and a speedy recovery, I am excited to be racing in Extreme E now.

“Nasser [Al-Attiyah] and the team gave me a very warm welcome and a quick course of the car, the regulations and all the procedures. Going straight into Qualifying is of course a tough thing, but I enjoy this challenge and will do my very best to make it a good one for all of us.”

Extreme E’s South American racing debut promises to be a special one. Find out where you can watch the action here.