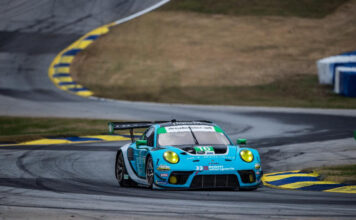 BRASELTON, Ga., (September 27, 2022) – After beginning the IMSA WeatherTech SportsCar Championship with a victory at the Rolex 24 At Daytona, Wright Motorsports heads to the season finale at Petit Le Mans for a final bid at the GTD class title. The No. 16 1st Phorm Porsche, with drivers Ryan Hardwick, Jan Heylen, and Zacharie Robichon, will compete in the 10-hour endurance event will all eyes focused on adding another championship title to the team’s remarkable history.

“Once again, we’re entering Petit Le Mans in contention for the championship,” said Team Owner John Wright. “We’ve come very close these last couple of years, and that’s a huge testament to the drivers and crew we have here at Wright Motorsports. We’ve been working hard for this one and are ready to get started. We have some strong competition, but a lot can happen in ten hours. We’ll focus on what we can control and see how it all plays out.”

As the endurance addition, Zacharie Robichon returns to the No. 16 Porsche 911 GT3 R for the final race, after previously running with the team in this year’s Rolex 24 at Daytona, Twelve Hours of Sebring, and the Six Hours of the Glen. The Canadian driver closed out the 2021 season with the GTD class title and will be a strong asset to the team as they make their final push for the championship.

Following the team’s win at Daytona International Speedway, the blue and white Porsche returned to victory circle once again at WeatherTech Raceway Laguna Seca. The group’s additional top-five finishes at the Long Beach Grand Prix and VIRginia International Raceway have kept the team in the championship hunt, despite a character-building season.

With 385 points remaining to be assigned, 57 points separate the No. 16 Porsche effort from the points leaders in both the team and driver standings. While the maximum of 35 points awarded during qualifying may not seem like a large pull, every point will be vital in the final hours of Saturday’s race. The group at Wright Motorsports is all too familiar with entering a season finale as contenders in the championship fight. Last season, the team clinched the Michelin Pilot Challenge and IMSA Michelin Endurance Cup during the Petit Le Mans weekend, and in 2020, drivers Ryan Hardwick and Patrick Long finished just two points shy of the IMSA WeatherTech GTD title after a commanding season. Four GTD entries remain in contention, and the No. 16 Wright Motorsports Porsche sits third in both the team and driver standings. The Ohio-based operation will not only need to execute flawlessly on track and in pit lane as usual, but also finish ahead of the Heart of Racing team and Team Korthoff Motorsports with sufficient room to have a points advantage.

Pending no interruptions from Hurricane Ian, the first practice will begin on Thursday morning, September 29. The 28-car, five-class field will have two more practice sessions that day before qualifying on Friday afternoon. The 25th Annual Motul Petit Le Mans will begin at 12:10 PM ET on Saturday, October 1, and the first three hours will air live on NBC. The entire race can be streamed flag-to-flag on Peacock.

It all comes down to this! As a competitor, these are the situations that you dream about. Our team has a chance to win one of the most prestigious championships in the sports car racing world, at the final race of the season, which is also my hometown race, the Petit Le Mans. Our team was in a similar situation last year in the Michelin Pilot Challenge championship where it all came down to the final race, and Jan and I were able to come out on top. We are squarely focused on achieving that same result this season and will give it everything we have to fight for the championship down to the very last lap.

You start every season hoping you’re in a position to go for the championship when you come to the last race, and we’re right there. So, I’m thrilled that we can go to Petit Le Mans knowing there’s a chance to win. It’s one of my favorite events of the year. To go there with a shot at winning is awesome. I’m looking forward to it. The whole team is really excited and it’s going to be a tough and exciting race. I can’t wait to get started.

Road Atlanta is one of my favorite tracks and to have the chance to jump back into the car with Wright Motorsports and push to help Ryan and Jan in their bid for the overall championship is one I am truly looking forward to.

They have had a number of solid races and we know that we have everything in place to continue the results. Petit is often times one of the most hardcore endurance races due to the short track and the “winner take all” aspect of being the end of the season. This makes for some of the best racing as a driver and we will be ready for it

The trio of Wright Motorsports-prepared Porsche 911 GT3 Cup race cars conclude their season in the Porsche Carrera Cup North America Presented by the Cayman Islands this weekend, and John Goetz enters the event second in the championship fight. With 16 points separating Goetz from points leader Mark Kvamme, the distribution of the 50 available points this weekend will decide this year’s winners. Following a strong performance at Indianapolis Motor Speedway last month, Atlanta local Varun Choksey will race the No. 13 Porsche on his home turf, looking to add a successful finish to these two top-five results earned so far this season. After missing the Porsche Sports Car Together Fest at Indianapolis, Hutton McKenna and the No. 88 Porsche return to finish out the season, aiming to close the year out on a high note.