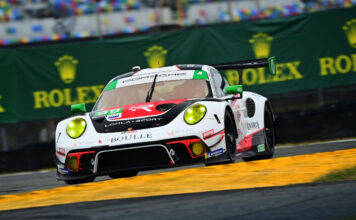 Ferriol, Legge and Boulle to Send Off the No. 99 GridRival/de Boulle Porsche 911 GT3 R in 10 Hour Petit Le Mans Endurance Race, with Galante and McAlister Wrapping the Pilot Challenge Season in the No. 22 Racing to End Alzheimer’s Porsche Cayman

BRASELTON, Georgia (September 28, 2022) – Hardpoint will wrap the IMSA season this week at Michelin Raceway Road Atlanta, where Nick Boulle returns to the team to join Rob Ferriol and Katherine Legge in Saturday’s 10-hour Motul Petit Le Mans endurance classic in the No. 99 GridRival/de Boulle Diamond and Jewelry Porsche 911 GT3 R, and Nick Galante and Sean McAlister will cap the season in the No. 22 Racing to End Alzheimer’s Porsche 718 Cayman GT4 RS Clubsport in the IMSA Michelin Pilot Challenge finale.

Friday’s two-hour Michelin Pilot Challenge race can be seen live streaming on Peacock at 1:10 p.m. ET on September 30, and tape delayed on USA Network at Noon ET on Monday, October 10. Petit Le Mans, the WeatherTech Sports Car Championship finale, can be seen in its entirety for 10 hours beginning at noon ET on Saturday, October 1 on Peacock. The opening three hours can be seen on the NBC Network, with the closing three hours, 30 minutes on USA Network beginning at 7 p.m. ET.

Nick Boulle returns to Hardpoint to bookend the season after opening as the team’s fourth driver at the Rolex 24 At Daytona. Boulle qualified the car at Daytona and helped the team to a top-10 finish at the endurance race.

Boulle’s last appearance at Petit Le Mans was in 2018, when he drove an LMP2 car for Performance Tech Motorsports. That day ended early for Boulle’s team, but not before he was able to make up ground for his team in a successful stint.

Legge’s most recent podium at Petit Le Mans came in the same 2018 race, where she finished second in the GTD class.

Ferriol and Legge participated in the track’s pre-event fan party on Tuesday night in the Suwanee Town Center. Both drivers participated in a fan forum, media interviews and an autograph session during the promotional party.

The Road Atlanta race is the final IMSA race for this model of Porsche 911 GT3 R, with a new version of the car on the way for the 2023 season.

Boulle rejoins the team for Petit Le Mans, filling the role held by Cusick Motorsports driver Stefan Wilson at Sebring and Watkins Glen. Cusick Motorsports and Wilson have redirected their focus toward IndyCar opportunities for the 2023 season after introducing LOHLA SPORT, Gnarly Jerky and Neptune Systems to the IMSA paddock during the 2022 seasons.

Galante and McAlister will represent Racing to End Alzheimer’s on the No. 22 Porsche Cayman for the final time this season in Pilot Challenge GS class.

The “purple Porsche” will carry nearly 200 names in tribute to loved ones around the country who have been touched by Alzheimer’s. The Racing to End Alzheimer’s team, led by founder Philip Frengs, have made recent stops at Porsche dealerships in Nashville and Chattanooga, Tennessee, on the way to Atlanta with a tribute car – a street version of the Porsche Cayman, complete with livery. Dealerships across the country have hosted Frengs, who has spoken with donors and race fans about the charity.

The program has raised nearly $100,000 to date this season through donations that go to Alzheimer’s care and cure programs. All of the donations go directly to the selected causes, with Frengs’ company, Legistics, covering the program overhead and the racing expenses.

If anyone knows the podium location at Road Atlanta, it’s Nick Galante. He was the ST class race winner in 2016, on the ST podium in 2018, and on the TCR class podium in 2019.

Hardpoint has been busy away from the IMSA paddock, as well. Brady Behrman scored a pair of Intercontinental GT podiums at Watkins Glen in September, driving his No. 428 TradeCentric Porsche 911 GT3 Cup.

Hardpoint’s eSports team captured the team championship in the Porsche Club of America Pro GT3 Cup series on the iRacing platform. Cameron Martineau and Chris Walsh combined to take home the team title on their rigs, including Asetek Sim Racing pedals, with Martineau second and Walsh fourth in the driver standings.

Rob Ferriol, Driver, No. 99 Porsche 911 GT3 R: “This is the last race of a challenging season, but the one thing that’s apparent is the effort our crew has put into this program. We’ve taken another step forward with a productive test session at Road Atlanta, so we plan to send the season and this model of the GT3 R out on a high note. Nick got back to speed at the test after being away from this car since Daytona, and we’re happy to have him back in our paddock space and a part of the team. Petit Le Mans is always a challenge because it’s busy, it’s long, and there’s historically been a lot of attrition. If we can take care of our business and continue to improve the car throughout the week, we’ll give Katherine an opportunity to bring home a finish for us at the end and launch that momentum into what is shaping up to be a busy 2023 season.”

Nick Boulle, Driver, No. 99 Porsche 911 GT3 R: “I’m really excited to get back behind the wheel of the No. 99 Hardpoint Porsche 911 GT3 R at Road Atlanta to bookend the season! We tested last week here and that helped me to get reacquainted with the Porsche. I’m hoping we can continue that momentum and make a good run at Petit Le Mans next week. I have to give a big thanks to de Boulle Motorsports and the Hardpoint team for a second opportunity in the car to finish the season. Hopefully we can surprise some people this weekend with our performance on what is always a long and exciting race.”

Katherine Legge, Driver, No. 99 Porsche 911 GT3 R: “Road Atlanta is not only my home race, but also one of my favorites! It is so much fun to drive and the 10-hour race adds all the excitement you need for the fans and drivers alike. The conditions are constantly changing and it’s tricky to cool exist with other classes of cars with all the elevation and unsighted turns. It’s great to have Nick back driving with us. We had a great test here last week and we are all buoyed and pumped to get in and give it out all for the last race of the season.”

Sean McAlister, Driver, No. 22 Porsche Cayman: “I really love Road Atlanta. It’s arguably my favorite on the schedule. 2020 was a good year here, I had a couple of podiums and I just missed the pole in qualifying by a few hundredths. I can’t wait to get on track and figure out the Cayman here. Let’s just hope the incoming hurricane doesn’t cancel anything on the schedule, but if it does hit and we’re on track in the rain it should make for some fun, wet driving!”

Nick Galante, Driver, No. 22 Porsche Cayman: “Road America has been kind to me over the years, so this feels like a great time to start a new podium streak. We’re really motivated to get a result with all of these inspiring names on the car, and Phil and the Racing to End Alzheimer’s team have done a fantastic job the last two weeks to make a push for donations, stopping at dealerships across the south to meet with donors. We appreciate the effort the fans and public have made, and I know this team will match that effort this week on the track.”