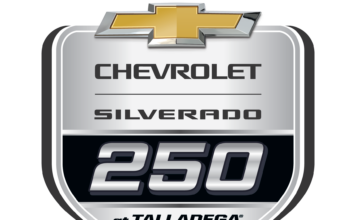 Chandler Chatter:
Chandler Smith and the No. 18 iBUYPOWER team head to Talladega Superspeedway for the second race of the Round of 8 looking to stay above the playoff bubble. Smith dominated the early portion of the opening round of the Round of 8 at Bristol Motor Speedway, picking up the opening two stage wins after taking the lead on lap 28 and remaining out front until he hit pit road on lap 117. After the pit stop, the 20-year-old driver found passing to be at a premium and was only able to work his way back to a ninth-place finish. After scoring 48 points over the course of the Bristol race, he sits second on the playoff grid, 24 points above the cutoff line for advancing to the Championship 4 with two races remaining in the Round of 8.

Saturday’s race will mark Smith’s third start in Truck Series action at Talladega. In his first-ever superspeedway race in any series, he brought home a third-place finish in the 2020 event. Last year, he ran inside the top 10 for the majority of the first half of the event before getting caught up in a 21-truck accident in the Final Stage that relegated him to a 19th-place finish. He also raced in the Xfinity Series race at the 2.66-mile tri-oval this year but was relegated to a 38th-place finish after getting caught up in an early wreck.

Smith punched his ticket to the Round of 8 with a win at Richmond (Va.) Raceway. Smith dominated the middle race of the Round of 10, leading 176 of the final 177 laps, picked up the Stage 2 win and the victory and added six playoff points that have carried over to the Round of 8. The victory was Smith’s third of 2022 and the fifth of his career.

The Toyota Racing Development product has produced three wins in 2022: the second race of the season at Las Vegas (Nev.) Motor Speedway, the regular season finale at Pocono (Pa.) Raceway and in the Round of 8 at Richmond. Across 20Truck Series starts this season Smith has recorded eight top-five and 14 top-10 finishes. He ranks first among Truck Series regulars in laps led (423), average running position (8.506), laps completed (2803) and quality passes (619), is second in average finish (8.7) and fastest laps run (202), and third in driver rating (103.9).

Smith made the playoffs last year in his first full-time campaign as the 10th seed. He advanced to the Round of 8 with a must-win victory at Bristol in the final race in the Round of 10. He found himself in another must-win situation in the final race in the Round of 8 at Martinsville (Va.) Speedway and saw his playoff run end when he finished fourth. As a consolation prize, he won the pole and swept all three stages in the NASCAR Camping World Truck Series finale at Phoenix (Ariz.) Raceway.

Veteran crew chief Danny Stockman will once again call the shots for Smith and the No. 18 team in 2022. Stockman’s drivers have produced eight victories at KBM since he joined the organization in 2020, including four with Smith behind the wheel. The veteran crew chief captured a Truck Series championship with Austin Dillon in 2011 and also won an Xfinity Series championship with Dillon in 2013. Stockman’s drivers have produced one top-five and three top-10 finishes resulting in an average finish of 9.3 across four Truck Series starts at Talladega. Smith’s third-place result in 2020 was his best result. In Xfinity Series action, his drivers have complied three top-10 finishes, with an average finish of 13.2 across six races.

iBUYPOWER will serve as the primary sponsor on Smith’s No. 18 Tundra TRD Pro on Saturday. Since 1999, iBUYPOWER has been delivering on its promise to build the best gaming systems for the most discerning gamers. Friday’s race will be the sixth event for iBUYPOWER sponsoring Smith’s KBM entry since 2019. Smith has finished inside the top 10 in all five of those races, including an eighth-place finish at Texas Motor Speedway in Fort Worth earlier this year. Safelite, the nation’s largest provider of vehicle glass repair, replacement and recalibration services, will be back on the No. 18 for the final two races of the season: Homestead-Miami (Fla.) Speedway and Phoenix (Ariz.) Raceway.

Chandler Smith, Driver Q&A:
With being 24 points above the cutoff line, how will you approach Saturday’s race?
“We’ve had some meetings about how we will approach it and I still don’t think we have an answer – we’re kind of up in the air. It’s super situation dependent – it depends on who we are racing around, where the other guys that we are racing for points are and what they are doing, how much energy is in the pack – and our strategy could change lap to lap. The ultimate goal is to finish the race in our iBUYPOWER Tundra TRD Pro and if we can collect some stage points along the way that would be a bonus. At the end of the day, we just need to be safe about it.

How important is it to have a good spotter for superspeedway races?
“It’s huge, if my spotter tells me to bail, I trust in his judgement and I’m going to bail without thinking about it twice. I have full trust in (Chris)Lambert and he’s obviously really good at what he does – you see what he and Denny (Hamlin) are able to do in the superspeedway races and they have the Daytona 500 rings to prove it.”