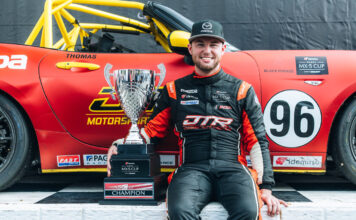 Gonzalez caps off season with a race win

BRASELTON, Ga. (Sept. 30, 2022) – The final race to determine the 2022 Idemitsu Mazda MX-5 Cup presented by BFGoodrich® Tires Champion was a game of numbers. Only 30 points separated Jared Thomas (No. 96 JTR Motorsports Engineering) and Connor Zilisch (No. 72 Hixon Motor Sports) at the top of the points coming into the race and only 10 points was the difference that earned Thomas the title. While the championship battle waged in the closing moments of the race, Tyler Gonzalez (No. 51 Copeland Motorsports) charged through the field to win his fourth race of the year.

Mazda MX-5 Cup races are known for being intense, but Friday’s finale at Michelin Raceway Road Atlanta took it to a whole new level.

Rookie Zilisch, starting on pole, trailed Thomas by 30 points in the championship. If the pair ended the race tied, Zilisch would win the tiebreaker having won four races to Thomas’ three.

When the green flag waved, Thomas was on the attack and into third by lap four, right behind Zilisch. The two were in a shark tank of drivers hungry for nothing less than a win, including defending champion Gresham Wagner (No. 5 Spark Performance), as well as Sam Paley (No. 28 McCumbee McAleer Racing) and Joey Atanasio (No. 43 Formidable Racing Development) who both were hungry for their first-ever MX-5 Cup wins.

The drama came to a head when Thomas made contact with another car in Turn Two and nearly slid into the tires. He rejoined the race in 17th and with Zilisch then leading, it looked as though his championship hopes were dashed.

Over the next 13 minutes, Thomas was able to crawl back to ninth without the assistance of any full-course yellows. Zilisch played it conservative after Thomas’ incident and finished sixth. It should have been enough of a point difference for Zilisch to claim the championship, but a penalty applied to Alex Bachoura (No. 33 Spark Performance) after the race moved Thomas up to eighth, giving him a 10-point advantage over Zilisch.

“I literally didn’t know that I had won the championship until I found out right there on pit lane after the race,” Thomas said. “But, what other fashion would it happen in Mazda MX-5 Cup? I mean that’s how it’s been all year long, so competitive. Congrats to Connor [Zilisch], he’s had a hell of a year. I’m really stoked for my JTR guys. There have been a lot of long days we’ve put in to build the team and build this program. This is just a dream come true. The big thing for me is all the other great race car drivers that have been in this series and put their mark on it and now I finally get to do that. I think it is one of the premier sports car championships in North America, just the best sports car racing you can experience and to win the championship is just an amazing feeling!”

Zilisch was heartbroken, believing he had done the right thing in the closing laps by being conservative.

“I can only see what’s there in front of me and they (team) were telling me on the radio that Jared [Thomas] was out of the race, and to just bring it home and I would win the championship. So I did that, and on the last lap I pointed another driver by as they were going for the win and I didn’t want to get wrecked. I gave the spot up and Jared ended up getting enough spots to jump me on the last lap. Super unfortunate.

“This Mazda series is so competitive-when there are 14 races in the championship, and it comes down to the last one and the last lap it just shows you that. Me, Jared [Thomas], Gresham [Wagner], Selin [Rollan], were all battling hard all year. Just to come out second place, we have to be proud of that after coming in as a rookie. Still, 75 percent of me just can’t be satisfied with that! So, we’ll learn from it and move on.”

Zilisch still walks away with $80,000 from Mazda for his Rookie of the Year title.

As the championship drama was unfolding, Gonzalez was quietly picking his way through the field and in the final 10 minutes of the race he was challenging for the lead. He took it with two laps to go and held on to the finish.

“We were lurking for that first half of the race, trying to play it safe so we could be there at the end,” Gonzalez said. “We stayed in the lead pack and then I saw an opportunity, took it, and worked my way up and then worked with Gresham [Wagner] on the last lap and really didn’t want to lead but that’s how it ended up and I’m glad we made the best of it.”

Gonzalez started the race from ninth and his run to the top spot also earned him the Hard Charger Award.

Wagner was gunning for a win Friday after falling out of championship contention in Thursday’s race. He led more laps than anyone else but finished 0.198-second behind Gonzalez.

“It’s hard to go out there when you aren’t fighting for the championship anymore, but it meant that there was a lot less pressure and maybe that helped me have a better race,” Wagner said. “Everyone raced hard and fair today, but no one wanted to work together. I guess everyone wanted to be up front just like I did!”

Atanasio was in the mix for a win the entire race but took the checkered flag in third. It is the rookie’s third podium of the season.

“It felt like it was a win, just fighting to be on the podium like that,” Atanasio said. “When Sam [Paley] and I were side-by-side going down the hill, I was like ‘no way I am giving this up!’ At one point my race was going backwards a bit, but then I just let everything cool back down a bit and things started to come back to us. The race was so fun, one of the most fun of the season. I’m really happy and I hope to see myself back here next year!”

Thomas will receive his championship trophy and $250,000 check from Mazda Friday evening at the MX-5 Cup year-end awards banquet. He is the 18th different MX-5 Cup Champion, a former MX-5 Cup Shootout winner and the 2020 Rookie of the Year.

Preparation begins now for the 2023 MX-5 Cup season, where drivers will compete for more than $1 million in prize money.