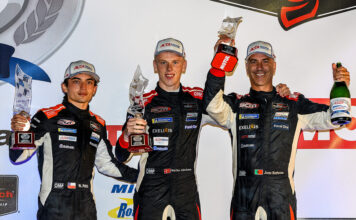 The Florida-based team secures second position in the season-long Michelin Endurance Cup, capturing podiums in three of the four endurance races including a victory at Sebring

With the third-place finish, SCM secured second place in the Michelin Endurance Cup, a championship-within-the-championship that awards points in each of the four endurance races (the Rolex 24 at Daytona, the Mobil 1 Twelve Hours of Sebring, the Sahlen’s Six Hours of the Glen and Petit Le Mans). The team finished second at Daytona and scored the win at Sebring.

Team veterans João Barbosa and Malthe Jakobsen were joined by European Le Mans Series points leader Nico Pino, subbing for Lance Willsey in the No. 33 SCM Exelixis/Focal One/Alta Equipment Ligier JS P320. The weekend got off to a difficult start in first practice on Thursday, as a DPi car hip-checked the Ligier as it came out of pit lane, damaging the left side of the car and taking the car out of the bulk of the practice session. Recovering quickly, the team arrived at a solid setup for Friday’s qualifying.

Jakobsen, 18, took the wheel for the 15-minute qualifying session and placed the No. 33 second on the starting grid after a lap-for-lap seesaw battle with the No. 74. At the drop of the green flag on Saturday’s race, Jakobsen stapled himself to the leader’s rear wing. But with the day much warmer than either of the two previous days on track, Jakobsen (and the rest of the field) battled tire pressure issues through the first stint, which was resolved as soon as he came into pit lane for four new Michelins under the race’s first caution period. He used those new tires well, easily passing the No. 36 to take the lead.

After 27 laps out front, Jakobsen came to pit lane under caution and handed to Pino, heading out for his first stint at Road Atlanta in fifth. Much of that stint came under yellow, however, as an incident between a prototype and a GT car resulted in wall damage that required extensive repair. Pino, and then Barbosa, made carefully calculated passes after each round of pit stops, pacing most of the mid-race in third position while managing oversteer and – with 43 cars on track – increasing traffic.

Jakobsen jumped in with 2:25 remaining, taking to the track in fourth. When the No. 74 ahead went to pit lane, Jakobsen took over third position – and held that position through a pit stop for fuel and tires. The fight for the final podium spot recommenced, until the second and third-place DPi cars came together in turn one which brought out another full course caution. The team brought Jakobsen to pit lane for a fast change of tires and a refuel, with the young Dane heading back on track once again in fourth.

Fighting hard, Jakobsen climbed to within five seconds of second but as traffic increased over the final laps he wisely held his ground to bring the No. 33 Ligier home in third – sealing a podium finish for the team in all three Michelin Endurance Cup races and bringing home second place in the IMEC championship.

“The race didn’t start that well, but the team kept adjusting tire pressure and the car got very competitive. We were able to get some speed during the night but unfortunately, we just lacked raw speed this weekend. But we had a plan for the race, and we did that: no mistakes and keep the car out of pit lane for anything but regular stops. Everything went smoothly, and the team really deserved this podium. We did our best and we know where we can improve before Daytona.”

“That first stint was tough with the tire pressures – but that’s the way the race went, really. We got behind a few times but were able to catch back up on the cautions. The car got better and better through the night and though it wasn’t the best car we had all season, we were good at the end. I think that’s what we could get today, so a good finish.”

“We weren’t the fastest in terms of pace but the entire team worked hard throughout the race and we were able to bring home a podium and second place in the endurance championship. It was a tough race in terms of pace, we were just lacking a bit in the last 20 minutes. I enjoyed working with the team, there are some good champions on this team, everyone had the same goal. And this is an amazing track – a lot of ups and downs, it’s like a roller coaster. It’s really tricky to get up to speed with the bumps and to understand the flow, but I got up to speed quickly and it was fun.”

“Getting hit in that first practice session cost us an hour of practice – people just don’t have any patience. The guys did a good job to get it back together and get it going for qualifying. The race went well, though it certainly had its ups and downs. But we ended up on the lead lap and on the podium, back from two laps down. The team did great, the drivers did great – it’s great to have two younger drivers have the chance to learn from a driver with the kind of resume that Joao has. We’ll see what happens with driver rankings and testing over the next month or so (the team had planned a test next week at Daytona International Speedway, but the recent hurricane flooded the infield). But prep for the Rolex 24 starts now.”

SCM thanks partners Alta Equipment Company, Focal One and Exelixis for their continued support.

Sean Creech Motorsport will begin the 2023 WeatherTech SportsCar Championship season next January 20-23 in the Roar Before the Rolex 24 at Daytona International Speedway.

Team leader Sean Creech has competed in a multitude of sports car series from 1990 until the present day, including Group C, IMSA GTP, WSC, Grand-Am, SRO World Challenge, and IMSA. SCM will contest the full WeatherTech SportsCar Championship in 2022 with João Barbosa and Lance Willsey. http://seancreechmotorsport.com/

An industry-leading material handling and construction equipment company, Alta Equipment is an innovator of solutions, delivering diverse products and unrivaled support centered on building lasting customer relationships. Alta Equipment began in 1984 with a single location in Detroit and has grown to 57 locations throughout the Midwest, Northeast, and Florida.

One in eight men will be diagnosed with prostate cancer during their lifetime in the United States. The Focal One® HIFU Prostate treatment offers patients a non-invasive outpatient procedure to target prostate tissue while avoiding the common side effects such as loss of urinary continence and sexual function. The Focal One treatment uses high performance, high intensity focused ultrasound (HIFU) to precisely target and ablate the prostate, allowing patients to quickly return to normal activities. http://www.focalone.com/