Countdown is on to Extreme E Season 2 showdown 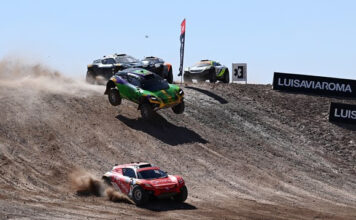 Championship leaders Rosberg X Racing (RXR) enter Punta del Este as favourites, having secured 83 points and two wins across their Season 2 campaign so far. This means that, despite technical issues ruling them out of the Final in Chile, Nico Rosberg’s team have kept their place at the top of the table. Claiming victory in Uruguay will secure them back-to-back Extreme E titles.

This remarkable feat will not be won without beating some tough opposition out on course. Only 17 points separate RXR from their closest rival, X44 Vida Carbon Racing, who seized their place in the championship running after claiming the win in Antofagasta, Chile. ACCIONA | SAINZ XE Team (60 points) and No.99 GMC HUMMER EV Chip Ganassi Racing (55 points) follow closely behind, ensuring the fight for top of the podium has gone down to the wire.

The race format will be as it was prior to Chile, with each driver completing one lap during the races. This means that every move will count towards final position, increasing the stakes of both Saturday and Sunday.

Alejandro Agag, Founder and CEO of Extreme E, said: “We are all set for a fantastic finale in Punta del Este.

“It has been an extremely competitive second season of Extreme E, with new winners and so many teams securing podiums it just goes to show the strength of our field out on course.

“It is fitting that we are completing the season in Uruguay, a country which shares so many of our beliefs around environmental progress, sustainability focuses, and raising awareness of the climate crisis.”

Uruguay is one of the leading countries in renewable energy production, currently generating over 98 per cent of all electricity from renewable sources, primarily through wind power. The South American nation will close Extreme E Season 2, which has been dedicated to highlighting tangible climate solutions via its ‘Race for the Planet’ standpoint.

The X Prix itself will take place near the sandy beaches of Punta del Este, on the Atlantic facing, 660km-long coastline in South-eastern Uruguay.

After the success of the first South American X Prix in Antofagasta, Chile, Extreme E is excited to be returning to the continent for its much-anticipated finale.

Enno Straten, Head of Strategy and Marketing at Continental Tires EMEA, said: “The 2022 season has been thrilling, with plenty of action on track. Once again familiar rivals X44 Vida Carbon Racing and Rosberg X Racing are battling to the end, but this time we see new contenders also battling it out for a place in the top three.

“With the addition of new locations this year, our tyres have really been put to the test in a variety of terrains, and we are pleased to say they have coped well.”

There will be some new faces for Extreme E fans to get to know in Punta del Este, as well as many of the series’ established stars in different race suits, in what promises to be an intriguing prospect.

The 22-year-old Swede replaces Jutta Kleinschmidt, who continues to recover from an injury suffered at the previous race in Chile. Kleinschmidt was ruled out of competing in Extreme E’s South American debut following a crash in Free Practice.

Veloce Racing will bring to Uruguay an all-new line-up, with 2021 Extreme E Champion Molly Taylor partnering series star Kevin Hansen, who moves from JBXE, to replace Christine GZ and Lance Woolridge. GZ will be the female Championship Driver for the Season 2 finale.

Meanwhile, due to a calendar clash, Kyle LeDuc will miss out on the Season 2 finale. Stepping in for LeDuc at No.99 GMC HUMMER EV Chip Ganassi Racing will be off-road star RJ Anderson, who will team up with Sara Price for the championship decider.

With the intense competition ahead, GridPlay will be crucial at the Uruguay Natural Energy X Prix.

Given the nature of the series, combined with an exciting new location, previous knowledge will not give an edge in Uruguay. The final championship standings will come down to just a handful of points still available.

With the difference in altitude, unique terrain, and a brand-new course to contend with, Extreme E’s return to South American racing is set up to be a special one… and we can’t wait!

Find out where you can watch the action here.