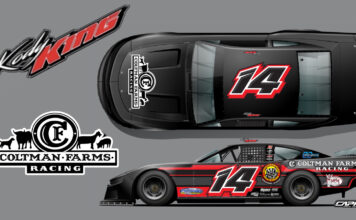 As King prepares to defend his championship at Hawkeye Downs Speedway and chase a title in the Big 8 Late Model Series, he will do so with Coltman Farms Racing logos adorning the hood and quarter panels of his new car supplied by Pathfinder Chassis.

The opportunity to represent Brett Coltman on pavement racing, combined with the speed of the Pathfinder Chassis, has King excited about the idea of representing the Coltman Farms Racing brand in victory lane on several occasions in 2023.

“It feels great to have [Brett] come aboard,” King said. “I’m just really grateful for the opportunity Brett has given me and I can’t thank him enough for believing in me. It’s really exciting to be an ambassador for Coltman Farms Racing as they continue to expand into asphalt racing.”

Sponsoring King’s family operation is the latest chapter in what has been a busy year for Coltman’s team.

Coltman said it made too much sense for him to assist King as part of his plan to further expand into pavement racing, adding that King has both the talent and composure he wants out of a driver representing his brand.

“We are excited to partner with Kody and expand our presence in the motorsports world,” Coltman said. “I had the opportunity to meet and follow Kody last year when he was with Lee Faulk Racing. He has a lot of talent for such a young kid, and we look forward to working with him and watching him progress in his racing career.”

Now that he has Coltman Farms Racing sponsorship for 2023, King is more motivated than ever to pick up from where he left off at Hawkeye Downs.

Earning a championship at his home track was one of King’s proudest moments as a driver in his young career. He has every intention of adding another Hawkeye Downs title and a Big 8 Late Model Series championship to his growing resume, with King adding that doing so with Coltman Farms Racing sponsorship would make those triumphs even more special.

“To be able to represent Coltman Farms Racing on asphalt here in the Midwest is amazing,” King said. “Having someone out there who believes in me, and my team is great, so hopefully we’ll be in for a great season.”

King will formally kick off his new partnership with Coltman Farms Racing on April 22 when the Big 8 Late Model Series heads to Rockford Speedway for the 46th annual Spring Classic.

Kody King would like to thank his parents, grandparents, fans, and supporters along with MPM Marketing and all his partners.

McCallister Precision Marketing (MPM) focuses on assisting up-and-coming race car drivers with career advancement and promotion. McCallister Precision Marketing helps drivers build confidence in front of and behind the camera, giving them the tools they need to advance to the next level. The company also provides companies with a strategic plan for their sales, marketing and promotional needs. We believe in building positive relationships with our clients so that we may provide them with the most professional, yet personal guidance they need, in order to achieve their racing goals. Our clients include race car drivers, race team owners, companies and racing series’. We also work closely with charities and charity events. For more information on McCallister Precision Marketing, visit www.MarketWithMPM.com, email TonyaMac44@MarketWithMPM.com or call 803-361-6199.