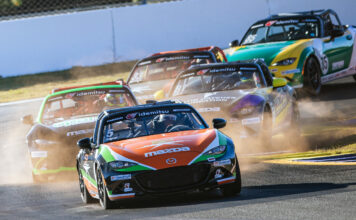 January 24, 2023 – Fans will be able to catch some of the best racing in the country live from their computers or phones as the Idemitsu Mazda MX-5 Cup presented by BFGoodrich® Tires will once again be streamed live at Racer.com in 2023.

The hugely competitive series will open its seven-event 2023 championship season as part of the Rolex 24 at Daytona this week at Daytona International Speedway. With over 30 identically prepared Mazda MX-5 Cup machines entered, the full field will not only be pursuing the $250,000 year-end championship prize on offer from Mazda, but also a significant per-race payout in 2023.

Every event on the Mazda MX-5 Cup schedule will feature two, 45-minute sprint races to be livestreamed on Racer.com. The livestreams are produced by NASCAR Productions, and feature play by play and commentary from the IMSA Radio squad headed by John Hindaugh and Shea Adam.

“We firmly believe that the Idemitsu Mazda MX-5 Cup is some of the best racing on the planet and it is fantastic that fans from around the world will be able to watch it live,” said Jonathan Applegate, Program Manager, Mazda Motorsports North America. “We were very pleased with the increases we saw in the metrics with this approach last season and are looking forward to another big year starting with this weekend in Daytona.”

This year’s Daytona lid-lifter will see 11 rookies, six previous race winners, and two series champions all take to the drafting-friendly track, which saw an incredible five-wide finish in the 2022 edition of the race.

“The Racer.com audience has continued to expand and hosting the MX-5 Cup livestreams has been a great way to connect our community with the Mazda races, which are just fantastic to watch,” said Racer VP of Sales and Publisher Bruce Kukuk. “Our viewership and engagement with the MX-5 Cup races in 2022 turned out some great viewership numbers, including 255,000 total views and continued to grow as more and more fans discovered where to go to catch the races. We are thrilled to be hosting the races again this year.”

Each MX-5 Cup car is built in Daytona Beach at Flis Performance, with the championship managed by Andersen Promotions. Thursday’s Round One race is slated to go green at 5:30pm ET, while Friday’s race will begin at 10:15am ET. Live timing for all sessions is available at MX-5Cup.com.

About: The Idemitsu Mazda MX-5 Cup presented by BFGoodrich® Tires is the signature spec series for Mazda Motorsports. The series has been operated by Andersen Promotions since 2017 and is currently sanctioned by IMSA. Mazda-powered grassroots champions can earn Mazda scholarships for this pro-level series. The Idemitsu Mazda MX-5 Cup awards more than $1 million in prizes and scholarships.